The Biber (Ger: "Beaver") is a German bridge laying vehicle based on the Leopard 1 hull. The turret has been removed and replaced with hydraulic equipment for deploying and retrieving the bridge span, which is carried stacked over the vehicle. On deployment the forward spade is lowered to the ground, stabilizing the vehicle. The two sections are extended using rollers and hydraulics, then the two halves are locked. Once the bridge is complete, the arm is brought forward and the hydraulics extend the bridge across the gap horizontally. As the bridge is fully deployed the arm lowers the bridge to the ground and unlatches. The spade is retracted, and the Biber can move away from the approach, allowing the accompanying combat unit to cross. Typically the bridge is then recovered and the bridging asset moves on with its organic unit. The LOC troops will emplace one or more fixed bridges and/or improve the banks allowing fording to be undertaken. As the bridge is deployed and recovered horizontally, rather than vertically, bridging can be more easily concealed from observation, either by terrain or a significant quantity of smoke. While any assault crossing is hazardous, this does reduce the risk, as the bridgehead can be secured before the precise crossing point can be determined. Unlike the Russian MT-55, the Biber's 22m bridge may span damaged single sections on the fixed bridges available in Steel Beasts Professional, but may not span multiple damaged sections or damaged railway bridges. 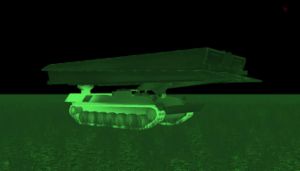 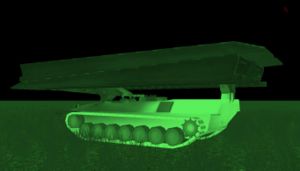 Starting with SB 2.620, it is possible to specify that bridge carrier vehicles start without carrying a bridge, and to predeploy AVLB bridge segments.

The designer can also decide if a mobile bridge should be made deployable (either for the whole map or in a deployment zone. Right-click on a bridge segment and select the desired option:

There is a gameplay limitation in Pro PE: rivers width can only be increments of 12.5 meters (a limitation of the (terrain) engine), which means that as 12.5m wide rivers are typically shallow enough no bridge is needed and that all other rivers are too wide to be breached by the Biber (with a bridge length of 20m) (Source).