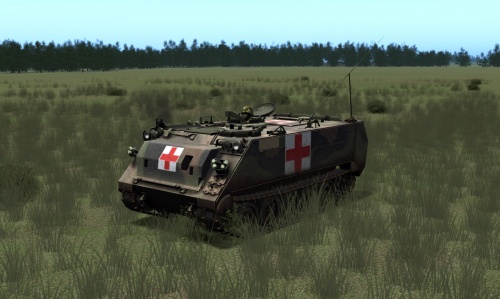 The M113A3 Medic is one of the countless variants of the M113 chassis. The modeled ambulance vehicle is based on the M113A3, and is configured to carry up to four stretcher or two stretcher and three ambulatory patients, along with a crew of four.

In Steel Beasts Professional all ambulance type vehicles are, to quote page 127 of the Manual: "special vehicles that are able to "repair" disabled crew members of vehicles." The vehicle itself has no effect on infantry units. As with other support vehicles, crew member repair/replacement can be accomplished by moving the unit with a disabled crew member close (75m) to the ambulance and then waiting.

Due to their "special" status, ambulance vehicles will not be targeted by enemy units. Prior to revision 4.156 such vehicles could not be directly crewed by players and no binocular or thermal/NVG view was available from the F8 observer position (although the F8 view was available when testing a mission in the Mission Editor). Additionally, ambulances could only travel along movement routes, as they did not accept manual driving input, nor could they be used to capture regions. With revision 4.156 all the above restrictions, with the exception of being unable to capture regions, have been lifted, allowing the medical portion of CSS (Combat Service Support) operations to be under player control. Note that ambulance vehicles will still not be targeted by enemy units, therefore an additional amount of diligence on the part of players will be required so that the special status of these vehicles is not abused.

Also beginning with revision 4.156 all ambulance vehicles now carry dismountable Medic Teams capable of “reviving” any dismounted infantry casualties (i.e. dead troops) that can be saved if they are located within a small radius (25m) of their location. Medic teams only effect dismounted elements, and not vehicle crews.

The medic team for the M113 Medic is 2 medics armed with 5.56mm rifles for self-defense.

Lastly, as of version 4.156 the M113A3 Medic may be equipped with the Diehl Active Vehicle Protection System (AVePS) to enhance protection against RPG and ATGM threats.

A note to gunners: With the exception of being unarmed, the M113 Medic's thermal signature is identical to that of a standard M113A3. Care should be taken to positively identify all potential targets with day optics before engaging!