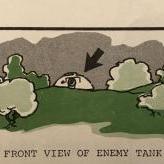 This is a large alternate-history scenario in which the Israelis preemptively invade the Sinai before the Yom Kippur war in 1973. You are in command of a combined-arms battalion and tasked with seizing two Egyptian strong points in 4 hours, before night falls.

The Egyptian defenses are both randomized and reactive to your assault plan—as such, the scenario will play out slightly differently every time you try it.

(This is my first scenario for Steel Beasts -- any comments and suggestions you have would be very helpful!)