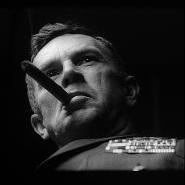 Playable as Blue Side Only --

This mission is the walk-the-talk portion of a Wiki article on using WERM and visual ranging, with this mission specfically highlighting the gill flaps on the T-64 that historically created ambiguity for gunners and commanders when ranging in poor visual conditions in the era before laser rangefinding.  In this scenario, you will be the gunner on 1-2 Sho't Kal tanks, using WERM in conjunction with your own experience and practice to hit incoming enemy tanks under challenging visual conditions.   Most of these targets will be T-64A's on the move, giving the user the chance to experience that "range-disruption" effect of the gill flaps first-hand. This is a firing range scenario, so these tanks will not be shooting back.  There are two firing position options, both of which can be activated, as well as a bonus round that can be enabled for additional practice and variety.

Feedback, bug reports, and anything else (Do you like it?  If not, why?  How can I improve or iterate this?  Want a sequel?) is welcomed, this is my first file here and more will be coming in a similar vein, for a tutorial or "Practice X skill or System" perspective.

Edited February 10 by Valleyboy
Adding in that feedback is welcome