A week ago the Warsaw Pact invaded West Germany. They have now advanced some 100 km into West Germany and are threatening a breakthrough south of Hanover. Warsaw Pact forces are now in their exploitation phase, bringing up tank divisions to help maintain the momentum. NATO has scraped together an ad-hoc multinational brigade to help stem the tide in this region. If the Warsaw Pact advance can be stopped in this vital sector, then the rest of their advance will suffer and they will seek an end to the conflict. If NATO fails to stop the Warsaw Pact advance, then the path to Paderborn and Dortmund will be open, and all will be lost. 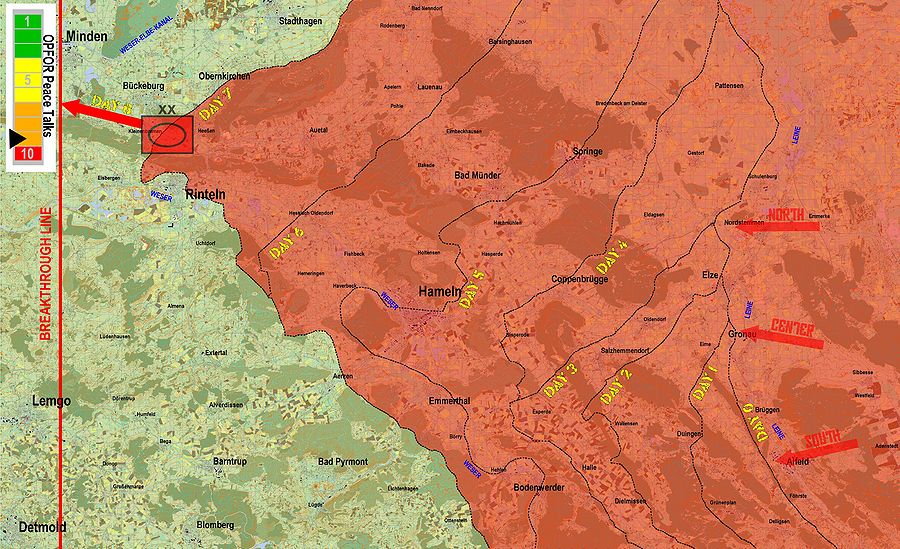 Click on map to go to image page, then click it again to go to full screen, then again to zoom in to full size. NOTE: The actual front line for BLUEFOR is 2km from the Red color on map. Yellow bracket denotes both how much the OPFOR commander can redeploy his force for the next Main Battle and the rough width of the map in each Main Battle scenario.

Table of Organization and Equipment (current)

...these are 1990s based, of secondary importance here

Current strength: 19%
Has been depleted below 30%: NO (happened in the last battle, after campaign ended)

Current strength: 63%
Has been depleted below 30%: YES

Attachments are temporary forces that get assigned to your side when limited objectives are achieved during the Main Battle scenario. These units do not below to your TOE, rather they are temporarily attached from other organizations. Most but not all attached units gained throughout the campaign will get carried over to following Main Battle scenarios, providing that they survive of course, however at any point all attached units may be withdrawn.

The following results of the BLUEFOR Attachment roll applies only to the BLUEFOR side when the limited objective for that week has been accomplished (with the exception of the loss of all attachments results, which always applies):

The following results of the OPFOR Attachment roll applies only to the OPFOR side when the limited objective for that week has been accomplished (with the exception of the loss of all attachments results, which always applies):

OPFOR victory, 8 missions. The result was very close, occurring in the last 6 minutes of the last battle (it was a last battle before the Peace Talks Meter reached 10).

The following award was made so that individuals can display them in their forum signatures if they so desire. They are simply for fun, for a bit of nostalgia in remembering the campaign. The only requirement is that you abide by the forum rules on signature sizes (400 x 60 maximum), and that you are honest to those that participated when choosing to display them.

All those who participated in the Red Tide '85 campaign may display the following ribbon in their signature if they so desire.