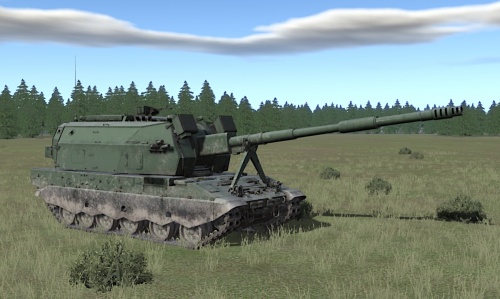 First seen in 2015, the 2S35 Koalitsiya-SV (Rus: 2С35 Coalition-SV) a 152mm self-propelled howitzer developed by UralVagonZavod for the Russian Federation. An 2006 outgrowth of the 2S19 Msta the design was originally prototyped with two auto-loading over-under 152mm howitzers but this line of development was canceled in 2010 in favor of a more conventional single tube design.

General layout is externally similar to that of other SPH systems, but is considerably different in actual execution. Although intended to use the Armata platform in the future, the current hull is based off of a heavily modified T-90 chassis. The power-pack is at the rear and the turret is centrally mounted with the main armament and an extensive bustle overhang. Standard crew is 3: commander, driver, and gunner located in a armored capsule at the vehicle front. Standard equipment is assumed to match that of the T-14 including NBC protection, night vision, computerized fire control, and digitized workstations for each member of the crew.

Main armament consists of a stabilized 152.4mm 2A88 howitzer of new design capable of firing HE-frag, HE/RAP, illumination, smoke, Krasnopol laser-guided projectiles, and nuclear rounds. The turret is believed to be fully automated, including ammunition loading and handling systems, and features a new modular charge system. This automation offers a claimed 15+ round-per-minute sustained rate of fire and a burst fire capability of 20 rounds-per-minute. Secondary armament consists of Kord 12.7mm remotely controlled weapon station for self-defense against air and ground targets.

Motive power appears to be that of the T-90MS: a 1130hp V-84S2F 12-cylinder diesel engine coupled to a automatic transmission with 7 forward and 1 reverse gears. Suspension is of the torsion bar type.

Introduced with Steel Beasts Pro PE version 4.156, the 2S35 is fully functional as an indirect-fire artillery piece capable of firing HE, smoke, and DPICM missions, along with limited direct-fire self-defense capability. 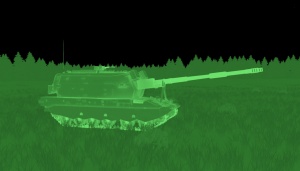 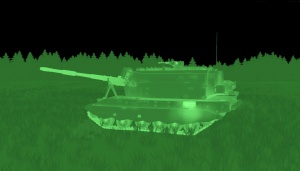