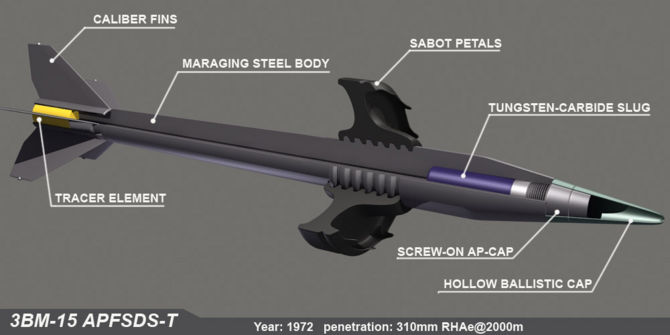 Using a slightly longer projectile compared to the 3BM9, the 3BM15 round enhances penetration by having a tungsten-carbide slug embedded in the forward part of the projectile body, in turn protected by an armor-piercing cap. Proof against most NATO tanks until 1978, this round's shape and full caliber fins sap muzzle velocity and limit the 3BM15's effective range against its contemporaries to 1500m and below. Although removed from Soviet service in the mid-1970's, the 3BM15 remained the most advanced 125mm round available to client states until the end of the Soviet Union, and was produced under license - along with local derivatives - in several countries.