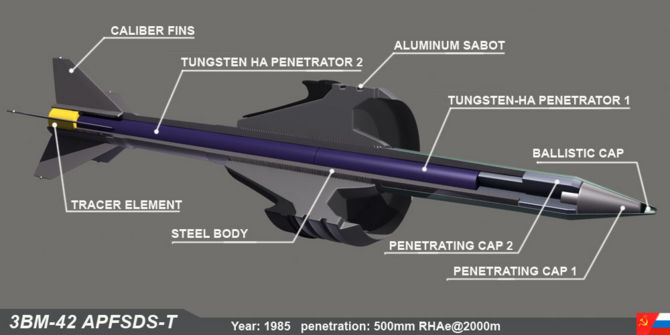 Developed under the research topic "Mango", the 3BM42 is an advanced Soviet long-rod APFSDS-T round that entered service in 1986. Specifically designed to defeat modern composite (NERA) armor arrays, the 3BM42 does not descend from the 3BM32 but is a parallel development of the 3BM26 and 3BM29 rounds, featuring an improved V-96Ts1 alloy version of the re-designed aluminum sabot introduced with the 3BM26 and a complex multi-part penetrator. The unique penetrator design consists of a solid austenitic frontal ballistic/penetrating cap, a second penetrating cap intended to dampen penetrator rebound and decrease yaw from reactive armor components, and two high elongation WHA rods contained in a marging steel outer body. Interfacing the rods with the projectile body is a low-melting-point alloy allowing them to slide forward during penetration without energy loss. Interestingly, despite its greater length to diameter ratio compared to the 3BM32 (20:1 vs 16:1), the 3BM42 performs roughly 5% worse against homogeneous targets while performing considerably better against spaced armor arrays. This difference typically results in both of these rounds being carried on the same vehicle in mixed loadouts.

Introduced in 1986, the 3BM42 was produced in large numbers and, along with the 3BM32, served as the principal anti-armor round for the Soviet Union through the end of the Cold War. This round saw action in both the Chechen and Georgian conflicts, and saw extensive use on both sides of the so-called "War in Donbass". Seeing worldwide proliferation with the exportation of more modern tank designs by Russia and the Ukraine, the 3BM42 is in service with various users across the Middle and Far-East along with the Americas. Due to export and combat usage, as of this writing (2019) it can be assumed that Russian stocks of 3BM42 rounds have been significantly reduced while Ukrainian stockpiles may be completely depleted.