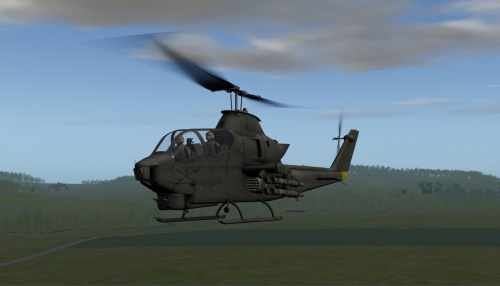 The AH-1 Cobra is a light-weight, two-blade, single engine attack helicopter manufactured by Bell Helicopter. Ostensibly, the modeled version is the AH-1Q, an anti-tank version intended to fill the operational gap left by the termination of the AH-56A Cheyenne program. Under the Improved Cobra Armament Program (ICAP) the aircraft received the M28A1E1 chin turret (later standardized as the M28A2), XM128 helmet sight subsystem (HSS) coupled with an infrared sight, XM65 TOW/Cobra missile subsystem, and was the first Cobra to feature the snub-nosed Telescopic Sight Unit (TSU). Deployed to Vietnam in 1973/74, the aircraft proved somewhat underpowered, leading to development of the up-engined AH-1S in 1976. Observant users will note the in-sim weapon fit does not match the exterior model, but is closer to that of the AH-1S (ECAS) featuring the three-barreled M197 20mm cannon instead of the minigun/grenade launcher combo.

Once the primary attack helicopter of the United States Army, the aircraft was phased out of active service by 1999, and reserve service in 2001. Modernized versions of the Cobra series (including the twin-engine Sea/Super Cobra variants) are in service with at least ten militaries worldwide including Japan, South Korea, Jordan, Iran, Pakistan, Turkey, Taiwan, and the United States Marine Corps.