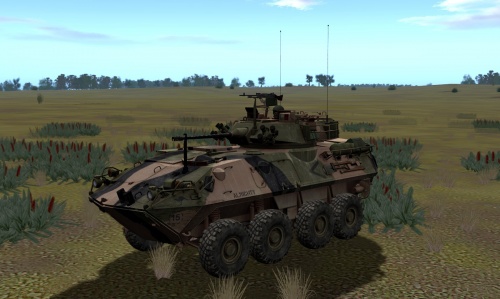 The ASLAV-25 in Steel Beasts Professional

The ASLAV-25 is the Australian equivalent of the LAV-25 and is also in the Mowag Piranha family of vehicles. The vehicle carries a large two-man turret armed with a 25mm M242 Bushmaster autocannon, and sacrifices much of the internal volume to accommodate the turret mechanism. Due to Australian requirements, including carrying additional water and spare wheels, the ASLAV-25 doesn't tend to operate with dismounts.


The armour is barely adequate against light auto cannon or HMG and offers little protection against infantry anti-armour weapons or any large caliber gun. The FCS includes a laser range finder, independent TIS and day sights using separate optics, and a ballistic computer which provides a 'fixed' lead solution based on the tracking immediately prior to requesting an autolay. While this isn't as responsive as a full dynamic lead capability, it doesn't suffer as much from low tracking quality which may arise from a wheeled suspension moving cross country, and is an improvement over the fully manual lead of the M2/M3 series.

The 8x8 independent suspension allows 'near tank class' off-road performance on favorable terrain, but this is mostly in comparison with older tank designs. Modern MBTs have improved suspension and power, and wheeled APCs can't compare favorably to the degree of mobility this offers. The ASLAV-25 is amphibious with minimal preparation.

The ASLAV-25 does not carry troops. 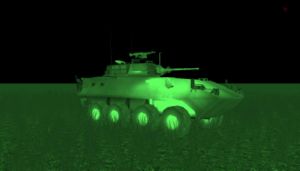 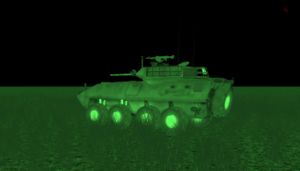 The most useful aspect of the GPS view is the thermal imaging system (TIS). Activate the TIS by pressing + on the num pad. The TIS sight on the ASLAV-25 is the primary sight. Turning it off will result in a black screen if you are utilizing the gunner's primary sight.


The fire control system of the ASLAV-25 is a bit tricky in comparison to other vehicles. See the following illustration to understand its operation:

ASLAV-25 FCS operation; it is normal for the reticle to be displayed at the top of the sight in TIS mode