The After Action Review, or AAR, is what follows the execution phase and allows users to review what happened in the mission.

Upon mission end, the first screen of the AAR Phase will present the mission scoring. It is important to note that not all missions will have scores and the precise method of scoring is decided upon by the mission's designer, not by the game engine itself. The scoring screen looks like this: 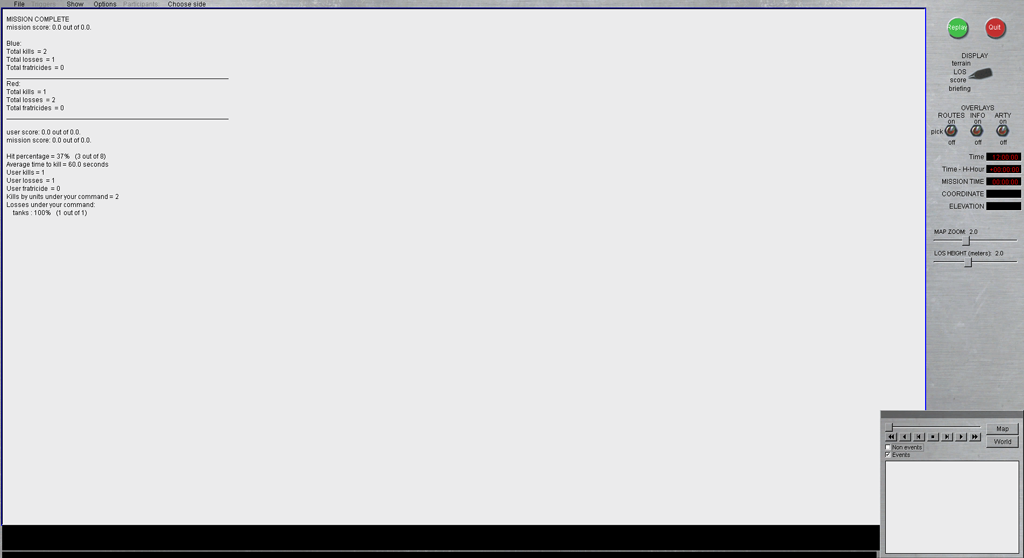 The key functionality provided by the AAR Phase is embedded in the small panel to the lower right. This is the playback control panel and it functions much like a typical VCR. Notice the 2 checkboxes labeled Non-events and Events. The Non-Events box, when selected, allows the player to play back the mission in a time-accelerated format. This is useful for watching the ebb and flow of the battle and observing the maneuvering of the two forces. The Events box, when selected, will show you only key combat events and acts somewhat like a slide show. You may also select both checkboxes to see everything.

The Map button (or F5 key) allows you to observe the playback on the map screen and, as you might expect, the World button (or F1 key) lets you see the action in the 3D world view. This is useful for examining hit locations, determining the source of a shot, etc. as seen in the image below: 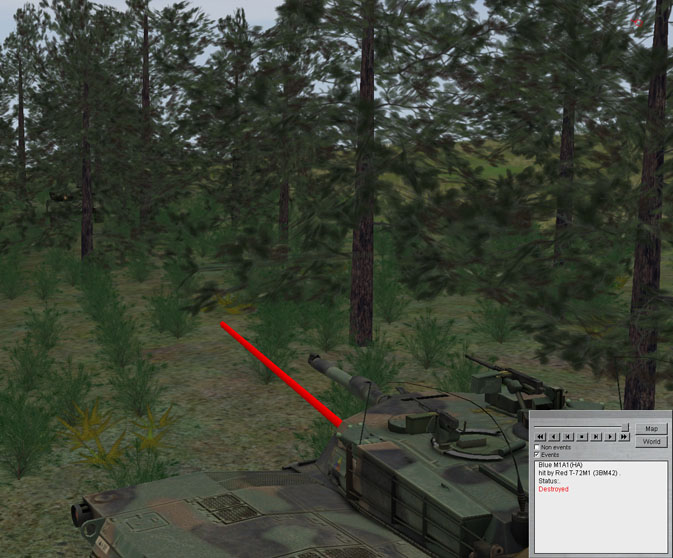 If you look closely and follow the line of the red shot marker, you will see the tank that killed the M1A1 lurking in the trees. The playback control panel also details the status of the target and the identity of the combatants. In a multi-player game, the names of the players that owned the vehicles are also included, making it easy to gloat :-)

The color of the arrow shows the type of hit (KE, HE, HEAT, Missile..) while the diameter of the arrow corresponds to the caliber.

While in the 3D world view, you may also toggle the thermal viewer on/off by using the numeric pad + key.

The Map button shows all of the same events, just in an overhead view on the regular map screen. Unit icons, shot paths, etc. are all shown as well. Shot paths are colored red or blue as appropriate.

The green Replay button allows you to try the mission again, while the red Quit button will exit the AAR phase. Before doing so, however, the game will offer you the option to save the AAR for later review.

Last but not least, Steel Beasts creates a "report" HTML file located in the "reports" subfolder of your Steel Beasts installation. This file should contain detailed participation, hit and logistic statistics, as well as a log of all text messages etc.