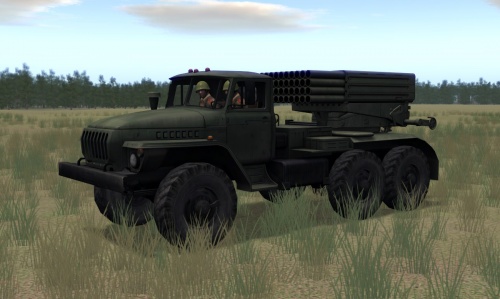 Entering service with the Soviet Army in 1963 as a replacement for the 140 mm BM-14 and WWII era BM-13 "Katyusha" rocket systems, the BM-21 "Grad" (Rus: 2B5 "Hail") is a truck-mounted 122 mm multiple rocket launcher. Equipped with a turntable mounted rectangular 122mm 40-tube rocket pack, the unit is capable of firing HE-frag, incendiary, and various chemical warheads out to 20km. Initially mounted on a Ural-375D six-by-six truck chassis, in 1976, the mounting was changed to the newer Ural-4320, and it is this version modeled in Steel Beasts Professional. The BM-21 system and its derivatives is in common usage by nearly all former Russo/Soviet client states, and is widely distributed, in various guises, among numerous second and third world governmental and irregular forces. Introduced with Steel Beasts Pro PE version 3.002 the BM-21 is fully functional as an indirect-fire artillery piece capable of firing player only directed HE missions. 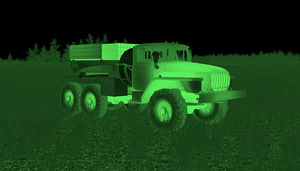 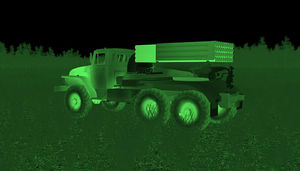