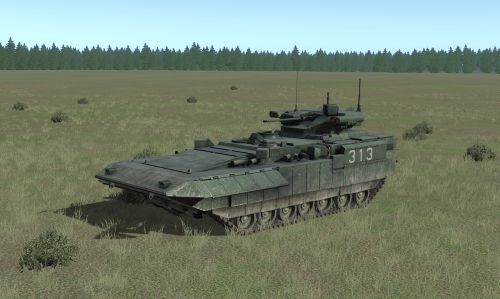 The BMP T15 Armata as it appears in Steel Beasts Professional

The BMP T-15 Armata (Rus: cannon/tank) is a fourth-generation heavy infantry fighting vehicle counterpart of the T-14 Armata tank. Based off of a reversed version of the Armata Universal Platform developed by UralVagonZavod tank manufacturing company the T-15 uses the same powerpack and suspension as its tank cousin while allowing for a large crew space a the rear of the vehicle. As with the T-14, the T-15's turret is unmanned and controlled remotely with little penetration into the crew compartment. Access for the primary crew is via three roof hatches with the commander and driver in tandem to the front and the gunner behind and to the left while access to the rear is through a hydraulically powered ramp at the rear.

Main armament consists of a fully stabilized Bumerang-BM remotely controlled turret armed with a 30mm 2A72 autocannon, a coaxial 7.62mm PKMT machine-gun, and four extended range AT-14 Kornet-EM ATGMs mounted two each on either side of the turret.

Designation of the fire control system is unknown but involves an integrated primary sight and IR backup sight equivalent to those of the T-90MS along with a third-generation thermal sight, laser rangefinder, and a full meteorological suite to increase first round hit probability. The commander is provided with a panoramic version of the same sighting complex for hunter-killer capability.

Motive power is provided by the same 1500hp twelve-cylinder ChTZ 12N360 diesel powerpack found on the T-14 along with a reversed version of the active suspension system adjustable at the first two and final roadwheel stations. 360° camera views are provided for the commander and driver to maintain situational awareness.

Overall protection is a composite matrix topped with Malakhit add-on explosive reactive armor with special attention given to the vehicle's “front” due to its forward engine placement offering a claimed 900mm+ of RHAe frontal protection. Flank protection is heavy, equivalent to western designs such as the Puma IFV class "C" while anti-RPG bar armor is fitted to the rear ramp for added protection. Like the T-14, the T-15's defensive suite is the Afghanit active protection system (APS), with both “hard kill” and “soft kill” countermeasures. The APS is guided by three radar panels (likely AESA), with two located just below the turret front corners, and one between the commander's and gunner's hatches for a combined 270° coverage. The main hard kill launchers are mounted in two groups of five along the hull's front sides and chassis covering 160° of the frontal arc and are supplemented by the NII Stali “Upper Hemisphere Protection Complex” which consists of two steerable box launchers with 12 smaller charges each to the left and right just in front of the turret (not currently modeled). The projectiles launched by the hard kill systems are of an unknown type, but are modeled as high-explosive fragmentation charges which are extremely effective against ATGMs, HEAT warheads , and, to a lesser extent, KE penetrators. Soft kill systems include laser warning receivers coupled with passive smoke and active jamming in both the IR and microwave ranges (jamming systems are also currently not modeled).

As with all members of the Armata Universal Platform, development began in 2010, and unveiling occurred during the 2015 Moscow Victory Day Parade. Apparently intended to outfit specialized assault units, due to Russia's economic situation and the T-15's experimental nature, procurement has been light, with only 60 units acquired. Sufficient to outfit two rifle battalions it is assumed that they are serving as part of a operational evaluation Brigade along with the T-14 Armata tanks. 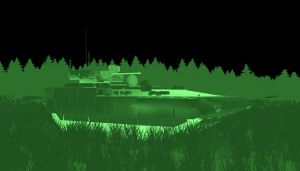 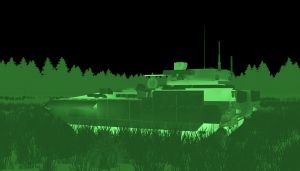