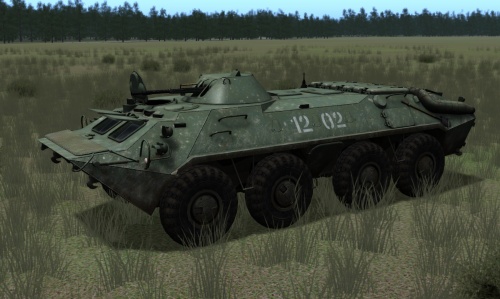 The BTR-70 in Steel Beasts Professional

Beginning production in 1972, the BTR-70 is a further refinement of the 8x8 Bronetransporter (lit. "Armored Transporter") concept begun with the BTR-60. Although the design's overall layout, mobility, and firepower remained unchanged, improvements over the BTR-60 include: a redesigned engine compartment housing more powerful 120 hp ZMZ-4905 gasoline engines; placement of triangular troop doors between the second and third pairs of wheels on both sides of the vehicle to speed troop deployment; a central tire-pressure regulation system; moderately increased armor protection; an automatic fire suppression system; and an improved NBC filtration system.

Due to its larger engines, the dismount section for the BTR-70 is reduced from a maximum of 14 to only 8 men, carrying 5 RPG-7S1 anti-armor weapons, a PKM machine gun, and 5.45mm rifles.

Compared to the over 30,000 BTR-60s manufactured, production of the BTR-70 was more modest with only 5,000-8,000 vehicles in total (including the Romanian TAB-77). Despite the low number produced, the BTR-70 served as the principal APC supporting front line motor-rifle regiments throughout mid 1970s and early 1980s until eventually supplanted by the BTR-80. Although no longer considered a front line machine, BTR-70s fill out the bulk of current Russian second line Motor-rifle Brigades. Russo/Soviet forces retained the bulk of BTR-70 production, exporting mostly to satellites, but few client states, limiting the BTR-70s distribution to about twenty users worldwide concentrated in the Near and Far East. 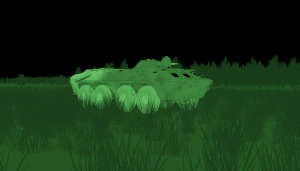 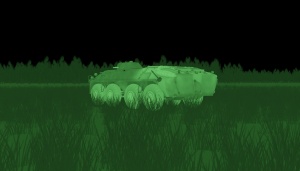 In Steel Beasts Professional the tank commander's (TC) position on the BTR-70 is fully crew-able, but only partially modeled with rudimentary interior views. The TC's position is accessed by pressing F7.


From this position the user can raise and lower their perspective (and exposure level) by holding the Q key (to go up) and the Z key (to go down). The TC can also button or unbutton (close and open the TC's hatch) by pressing the B key (toggle). While unbuttoned, the TC may also wish to use binoculars to get a closer view on a distant area by pressing the N key (toggle). Pressing the Shift-B key combination will close the ballistic doors in front of the wind shield, in that case the vision blocks have to be used!


Note that with the hatch open the gunner cannot slew the gun, so it is advisable for the TC to use the vision blocks instead!

The TPKU-2B day sight commander's periscope is mounted at the front of the TC's station and traversable across the vehicle's frontal 60° arc. The periscope is used for target acquisition, range estimation, directing the gunner onto a target and has a fixed 5x magnification. A TKN-1 IR sight replaces the TPKU-2B for night observation, but is of poor quality and short ranged, barely keeping the BTR-70 from being completely blind in darkness.


The TC can access the TPKU-2B periscope by pressing F3.


Once the user is at the TPKU-2B periscope view, the user can traverse and elevate the sight using either the mouse or joystick. Note that the periscope has only a very limited range of movement in elevation.


The sight on the TPKU-2B is a simple reticle with lead and elevation lines marked in mils (Russian). The reticle also has a series of marks used for range estimation similar to the M1 tank's GAS sight. The numbers along the bottom of the scale represent the range in hundreds of meters. To estimate range to a typical sized tank target, place the range scale so that the bottom horizontal line is where the bottom of the tracks of the vehicle is, and the top part of the scale is at the top horizontal hash mark of the turret. When the target fully fits between the two, then the range is estimated at the value above the appropriate has mark.


The TKN-1's night vision can be turned on by pressing the + key on the num pad, however, this cannot be activated during daylight.

On some occasions the TC may need to look around the vehicle without having to expose himself to hostile fire. The vision block view allows the TC to remain safely inside the vehicle and quickly scan around for close threats. It is most useful when enemy infantry are in the immediate area, although the TKN-3 periscope is probably more useful for this purpose. The BTR-70 commander has four TNPO-115 vision blocks (identical the BTR-60), which cover the vehicle's front and right side, and may be accessed by pressing F4.

SHIFT + TAB: Smoke Generator. Instructs the driver to deploy a smoke screen by injecting diesel fuel into the exhaust manifold. Useful for breaking up enemy LRFs or obscuring following vehicles and infantry against a non thermal sight equipped threat.

LEFT ARROW / RIGHT ARROW: Face left / face right. When in the TC's eye view F1, pressing these keys will cause the TC to face to the left or right of the main gun (turret).

SPACE BAR: Fire. Orders the gunner to fire at a target he is looking at.


SHIFT + PAGE DOWN: Reload all. Orders the tank crew to reload all weapons systems.

The PP-61AM periscopic sight is used by BRDM-2 and BTR gunners to aim their 14.5mm KPV-T and 7.62mm PK-T guns. It is a simple static sight with a fixed 2.6x magnification.

Note that there is no thermal channel, and no light amplification available. In other words, even at night the gunner has to use his eyesight! 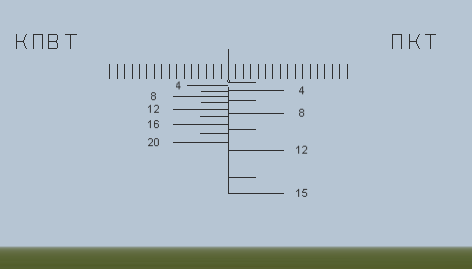 On the left side of the sight are the markings for the 14.5mm gun, while on the right side are the superelevation offsets for the 7.62mm gun. The numbers denote distanced in hundreds of meters. Across the top of the sight is a series of vertical lines used for range determination. The long central line is four mils high, while the short lines to either side are two mils high. The space between the lines is one mil each. All mil measurements are in Russian mils.

Note that there is no compensation for parallax so at extremely short ranges the sight markings will be inaccurate!

As noted under the description above, elevation and traverse controls for the BTR-70 are manual but, beginning with revision 4.016, may be moved in elevation and traverse with either the mouse or joystick. For manual use of the handcranks the default movement keys are UP ARROW / DOWN ARROW for elevation and depression respectively, and LEFT ARROW / RIGHT ARROW for left and right traverse. Tapping these keys quicker results in faster movement.

Engaging targets with the pp-61AM sight is fairly straight forward. Once a target's range has been determined (using either the mil scale described above or using a range provided by the TC) align the target with the central sight line and elevate the sight to the appropriate range line for the weapon being fired. Pressing SPACEBAR or Joystick Button 1 fires the selected gun with M toggling between the KPV-T and coax. Lead is manually applied using the mil scale described above. Thanks to the 14.5mm's flat firing characteristics, BOT (burst on target) engagement techniques are the norm.

When buttoned up, the driver views the world through 4 TNPO-115 vision blocks set in the roof of his compartment and a windshield to his direct front. Pressing the Shift-B key combination will open and close the ballistic doors in front of the windshield.