Brush War is a multi-sided campaign focusing on conventional and unconventional warfare which features leaders that have perks, and units that are acquired through an income of points. 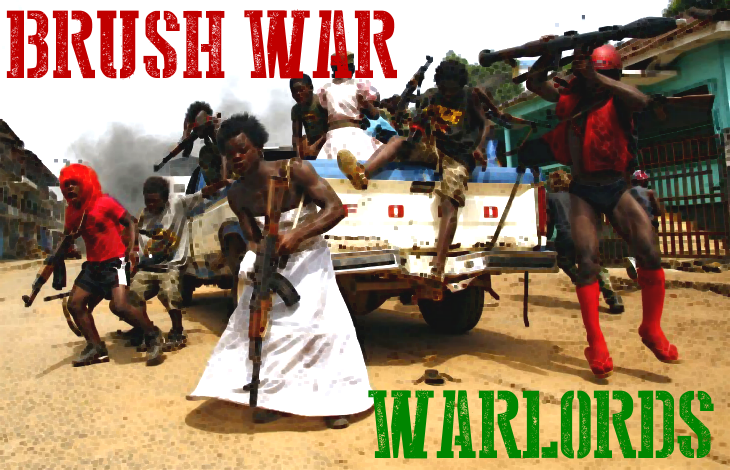 Brush War models a fictional war, in a fictional place, between four warlords. The emphasis on the campaign is leadership (via the Warlord's abilities), small unit tactics, and resource management with forces purchased from an income of Points gained by capturing and holding objectives. Additionally, the warlords are supporting characters that represent the commander of each side, and gains experience and effectiveness through battle.

Each battle lasts 60 minutes, and once the battle is finished then Points are earned from a basic income, plus a number of Points provided by the objectives that are held. These Points are then used to purchase new units and items for your inventory which are used in the next battle.

Once a faction has 750 Points or more in objective value at the end of a battle, all other Warlords are captured and executed and the campaign is won -- control has been established in the region.

After a battle, units and items are purchased with Points, using the Unit Cost Calculator. Think of the units being purchased as mercenary forces (Points being an abstraction of money and other resources).

The restrictions on unit purchases are:

The Warlord is the faction's leader. The leader does not participate in battle and so cannot be killed normally, however the Warlord is located in an HQ that can be overrun which may cause a reduction in Skills or death.

The Warlord appears in battle and is represented as an M577 command vehicle.

In the first battle, this command vehicle is mobile, and can go wherever it wants, and can even be used to take an objective, but it should generally avoid combat. In all battles after the first, the Warlord vehicle is "deployed" (is in a fixed position) and cannot move, but it can be deployed within objectives that begin under your control.

When reducing Skill points, remember to count any Skill points accumulated in the current battle as points that can be reduced (this means that in the first battle, if your Warlord with 0 Skill points is wounded then you would gain no Skill points for that battle).

Note that it is possible, but rare, that you could lose an objective that the Warlord is located in but by the end of the battle your Warlord is not destroyed. If this happens, there are no penalties to the Warlord - he must deploy to a different objective next turn, if any are available.

Killed (No objective to deploy to)

If at the start of a battle the Warlord has no objective to deploy to, then the Warlord is killed (either by his own men - murdered for his ineptitude - or died as a result of wounds). If this happens, a random Warlord is generated as a replacement, starting again at Rank 0.

After each battle, each Warlord gains 1 Skill point and the players decide which Warlord Skill to increase. Also, after the first battle, whenever a faction takes an objective but does not lose any objectives they started the battle with, then their Warlord gains an additional Skill point. This means that a Warlord can gain a MAXIMUM of 2 Skill points per battle.

Each Warlord Skill has up to three levels, each one providing an increase in effectiveness.


L1: May purchase bunkers and gun pits
L2: May purchase trenches
L3: May purchase AT ditches, mine plows, can remove obstacles from your territory, and you receive 1x BREM-1 ARV into inventory (a one time addition)


L1: Your deployment zone around your objectives is increased from 500m to 750m


...additionally, if enemy does not also have this L1 or higher Skill, it overrides enemy deployment zones but does not enter enemy objectives

L2: Your deployment zone around your objectives is increased from 750m to 1,000m


...additionally, if enemy does not also have this L2 or higher Skill, it overrides enemy deployment zones but does not enter enemy objectives

L3: Before battle, you will be notified by each commander (in a PM) which objective each of their Warlord HQ is located in

For fun, a Warlord will gain a unique title the first time they accomplish a feat that is in the following list. The first gained title will remain permanently with the leader.

There are a total of 13 ranks, which can be considered a high score of sorts. Note that rank can decrease if the Warlord loses Skill levels due to the Warlord's HQ being lost.

At the end of a campaign, regardless of which side won, the side with the highest rank Warlord is a good indication of who best protected their Warlord.