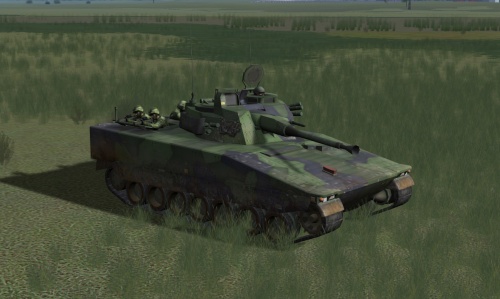 The CV 90/40-B in Steel Beasts Professional

The CV9040B (Stridsfordon 9040B) is a Swedish infantry fighting vehicle (IFV) designed by Sweden's Defense Materiel Administration (Försvarets Materielverk, FMV) in cooperation with Hägglunds and AB Bofors from 1983 through 1991. With initial deliveries beginning in 1994, the CV90 series offers high mobility, survivability, and protection combined with air defense and moderate anti-tank capability.

Armament consists of a fully stabilized AB Bofors 40mm Ak 40/70Bc machine-cannon installed in an inverted position coupled with a coaxial 7.62 mm Ksp m/39 machine gun (M1919A4). The main gun feeds from three 8-round magazines and has maximum a rate of fire of 300 rounds per minute. An additional 48 rounds are stored in the turret and 162 rounds in the hull.

The gunner's main sight is a SAAB UTAAS (Universal Tank and Anti-Aircraft Sight) with a fixed 8x magnification day channel, 8x and 24x magnifications for the thermal channel, and an integrated laser rangefinder. Auxiliary sighting consists of an externally mounted SABTRONIC model FA 878 I CCIR video camera on the left side of the gun. This camera generates its own reticle and the image can be transferred to the gunner’s monitor. The commander has no enhanced sighting systems beyond an extension of the gunner's thermal channel.

Motive power is provided by a 550hp six-cylinder Scania DS14 14 liter diesel engine coupled to a Perkins X-300-5N fully automatic transmission with a total of four forward and two reverse gears. Suspension is of the torsion bar type.

Note that the CV9040B currently shares interior artwork with the CV9040C.

Beginning with revision 4.156 the CV9040B may be equipped with the Diehl Active Vehicle Protection System (AVePS) to enhance protection against RPG and ATGM threats. 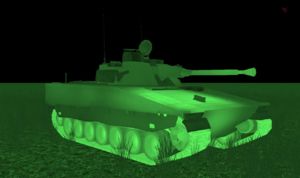 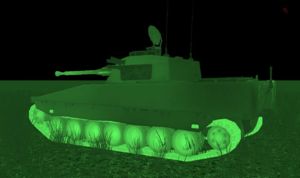