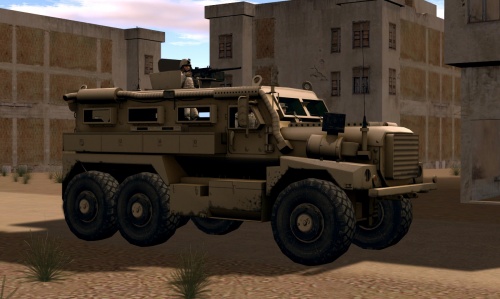 The Cougar MRAP as it appears in Steel Beasts Professional

Created in response to an urgent requirement by the USMC by Force Protection Inc. in 2004, the Cougar family of vehicles provides a mobile, lightly armored, and highly IED resistant package suitable for urban and counter-insurgency operations. Although the armor is thin, this vehicle is remarkably resilient to most light threats. Still, it should avoid exposure and utilize direct fire only in support of its dismounted infantry, or in emergencies. Like its Bushmaster cousin, the Cougar is survivable against IEDs and other mines, using hull shaping and isolation of the crew from the hull to provide much higher survivability than conventional light vehicles.

The modeled version is the standard Category II (8+ passengers, 15-25 tonnes) 6x6 FPI Cougar equipped with the objective gunner protection kit (OGPK) which by default carries an M2HB .50cal machine gun, but may also be fitted with either M240 or MG3 medium machine guns. Optionally, the Lemur remote weapon station or M151 Protector RWS may be substituted for the OGPK. This vehicle is fully modeled and crew-able at the Commander's (F7), Gunner's (F6), Driver's (F9), and Squad Leader's (F11) positions.

A popular design, the Cougar is in use by at least nineteen nations worldwide including the United States, United Kingdom (Mastiff), Iraq (Badger), and Canada.

Beginning with revision 4.156 the Cougar MRAP may be equipped with the Diehl Active Vehicle Protection System (AVePS) to enhance protection against RPG and ATGM threats. 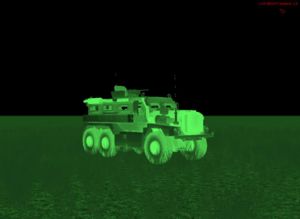 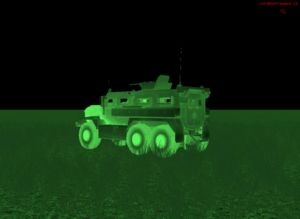