An EFP, or Explosively Formed Penetrator, is a shaped charge formed by explosively shaping a metal plate or liner into a slug or rod shape and accelerate it towards a target. What makes this kind of shaped charge different from a conventional shaped charge, which also uses explosive force to create a molten projectile, is that an EFP is shaped using explosives behind a shallow dish or plate, while conventional shaped charges instead compress the molten metal into a small space, similar to a funnel. An EFP also has a much longer effective range, unlike a shaped charge, which can lose energy and potency with distance, thus the reason for spaced armor and similar innovations and make-shift constructions to foil the shaped-charge warheads on RPGs.

While EFPs are hardly new technology (they go back to the 1930s petroleum industry for perforating wells), modern computer technology has allowed the perfection and sharing of the special geometry of construction that allows these to be especially lethal, and they can do enormous damage, penetrating significant amounts of armor to kill or disable heavily armored vehicles. EFPs also penetrate massive amounts of layer for their size and velocity, and velocity is around 2000 meters per second, or about Mach 6, with a sample weight for this example at around 3kg (7 pounds). This is quite extraordinary.

It is interesting to note that this technology has been use in a wide variety of applications, from terrorist and guerilla attacks, to military-grade smart weapons, and even on select space missions for scientific purposes. 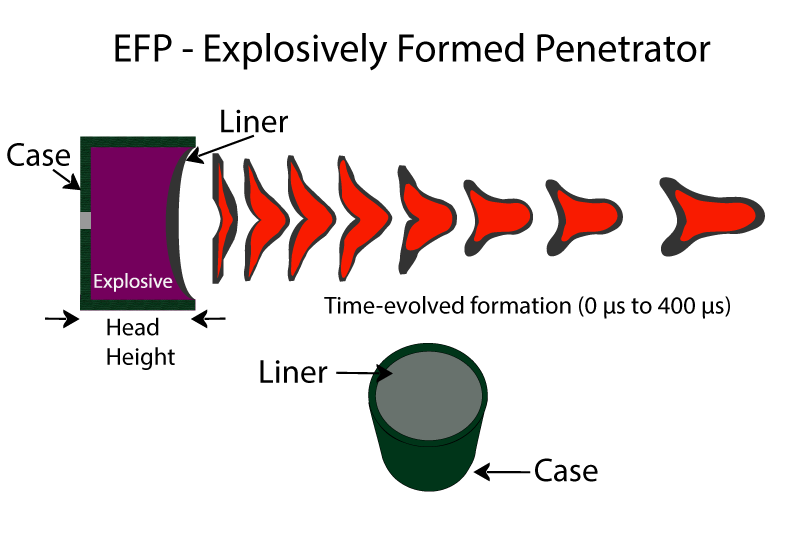