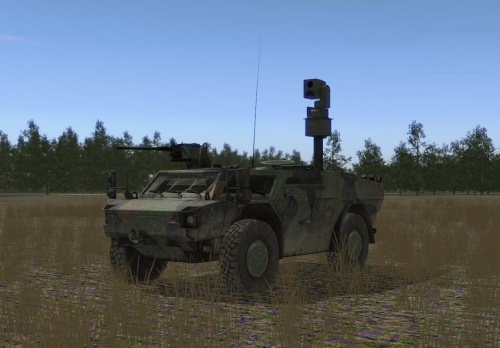 Initially developed as a private venture by the SP Aerospace Company, the Fennek is a 4x4 light armored reconnaissance vehicle that entered Dutch and German service in 2003. Beginning with revision 4.156 Steel Beasts Professional models a number of specialized versions armed with either a .50 cal M2 Browning heavy machine gun or 40mm automatic grenade launcher all of which possesses excellent on and off-road mobility and very quiet operation.

Beginning with revision 4.250 all Fennek vehicles except SWP version are fully modeled and crew-able at the Commander's (F7), Gunner's (F6), and Driver's (F9) positions. The Fennek SWP is not crew-able and can be used from observer’s position (F8) only.

*Fennek FO, Recce, and TACP vehicles are equipped with a retractable mast-mounted sensor pod (BAA - Beobachtungs und Aufklärungsausstattung [Observation and reconnaissance equipment]) and have an associated control station, which can be shared between commander and gunner. Developed by Rheinmetall Defense Electronics, the BAA is the primary intelligence gathering tool carrying high-definition day/thermal optics and a laser rangefinder. This coupled with extensive communications equipment, a GPS enabled land navigation system, and an integrated C3I network, allows the relay of information in real time. The Fennek AD, Mortar, and MRAT are essentially personnel carriers without sophisticated reconnaissance optics and associated gear.

All in-sim Fennek-series vehicles can be configured with a pintle-mounted 7.62mm machine gun at the commander’s position with the available options being either an MG3 or M240/FN MAG.

Note: When under AI control Fennek FO, Recce, and TACP vehicles equipped with sensor pods will deploy their masts whenever they stop, and, despite the sensor pod being functional, the Fennek will position itself so that the AI “crew” will have adequate fields of observation. Against AI opponents, this has no repercussions, since the AI will identify the vehicle regardless of overall exposure, but against human players, users must be mindful to place the Fennek in positions that avoid skylining the unit. 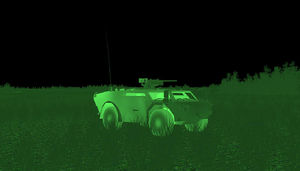 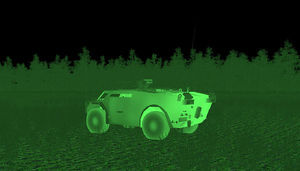 In Steel Beasts Professional the vehicle commander's (VC) position on the Fennek is fully crew-able. The VC's position is accessed by pressing F7.

From this position the user can raise and lower their perspective (and exposure level) by holding the Q key (to go up) and the Z key (to go down). The VC can also button or unbutton (close and open the VC's hatch) by pressing the B key (toggle). While unbuttoned, the VC may also wish to use binoculars to get a closer view on a distant area by pressing the N key (toggle).


From the F1 interior view, the N key is also used for getting a closer look/access different panels in the turret.

The Fennek has an optional 7.62mm machine gun (MG3 or M240) mounted on the commanders cupola. The weapon is intended for air defense and against infantry and is accessed with the ALT + F2 key.

The gun sight view is the machine gun's standard iron sights and has no provision for range determination. Once in the gun sight view you are able to slew the gun and manipulate elevation using the mouse or joystick. The MG is fired with the SPACE BAR.

The control station (specific to Fennek FO, Recce and TACP only) is composed of the BAA control panel with display, SBP (System Bediener Panel [System Control Panel]), and a battle management system (BMS) terminal; by default it is located at commander’s station, but the entire assembly can be moved to gunner’s station or returned back with O key. During a network session, if both the commander’s and gunner’s stations are manned by users, only the user occupying commander’s station can “give” the control station to the gunner or “take” it back. While in offline session it is up to the user to decide at which position he needs this station, no matter if he or she is at the commander’s or gunner’s position at any given moment. If vehicle is under AI control, e.g. not occupied by the human user, the AI TC will always move control console to his position.

BAA pod (camera views) can be panned with mouse or joystick; to lase target in order to obtain range and coordinates the user should press Ctrl key or the right mouse button. It is important to note that lasing is possible only if high magnification is enabled.

Also, if multiple targets are lased in successive order, only data for the 1st target will be displayed and the user needs manually cycle through the targets with the “+” and “-” buttons found on the control panel under BAA screen, which also contains additional controls.

User can utilize Up, Down, Left, and Right arrow keys while in the BAA display view or, in eye view (F1), clickable controls to navigate through this menu. 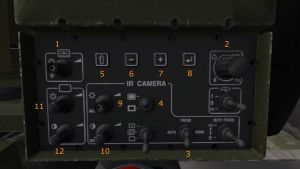 
The panel shown above can be accessed by zooming-in (hotkey is “N”) with center of ‘”eye” view aimed at it. 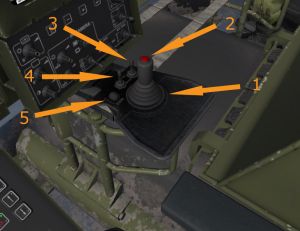 This panel is a spinal cord of entire system, since it controls a large number of mission-essential functions; the TC can access it with Alt + F2 key combination, or by clicking its display. 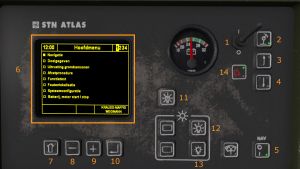 Note: when BAA pod is being deployed, “Mast down” button will blink green - this is normal behavior. 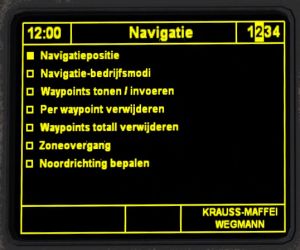 Not all features of this menu are simulated, and the availability of functions depends of vehicle’s model and role. 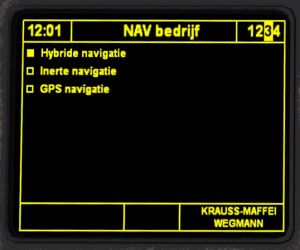 The rest of “Navigatie” 2nd level entries are not implemented. 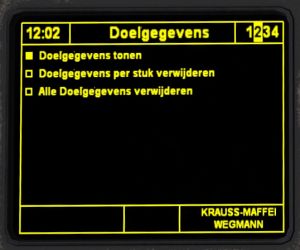 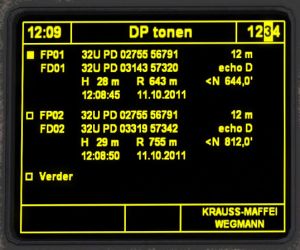 
In the case of Fennek FO and TACP vehicles, the coordinates of any lased target are automatically imported in to the Call-for-Fire dialog, which can store data for up to 3 targets with most recently lased target coordinates marked as “Laser range finder 1”. Since the SBP can store coordinates for many dozens previously lased targets, the user can manually select and feed data for any of such target in to the CFF dialog. In order to do this, user should go to the SBP view with Alt + F2 (valid for both CDR’s and DRV’s positions), then pick the "Doelgegeven" entry by left clicking the "+" and "-" buttons on the SBP and confirming the selection by left clicking the “CONFIRM” button - this will bring up the 2nd level menu (screen) in to view. “Doelgegevens tonen” is already selected there, so the user just needs to confirm the selection. The 3rd level “DP tonen” menu displays a list of lased targets, 2 targets per screen, and the sub-screens of further target lists are cycled with the “Verder” selection. Once the user has selected the correct target, confirm selection with “CONFIRM” button and the coordinates of the selected target will be added to the CFF dialog as “Laser range finder 1”.

Data set per for each target as shown in “DP tonen” list includes:

Steel Beasts Professional does not simulate any specific battle management system, therefore the BMS terminal provides a real-time visualization of the map view (F5) while user is in the eye view (F1). Note, the BMS terminal power can be toggled on and off with button at its left-upper corner.

The gunner's (system operator’s) position is accessed by pressing F6. From this position the user can raise and lower their perspective (and exposure level) by holding the Q key (to go up) and the Z key (to go down). The gunner can also button or unbutton (close and open the gunner's hatch) by pressing the B key (toggle). While unbuttoned, user can use binoculars by pressing N key (toggle). In offline sessions users occupying the gunner’s position of FO, reconnaissance, or TACP versions of Fennek can slide the control station for mission equipment to his position with O key. 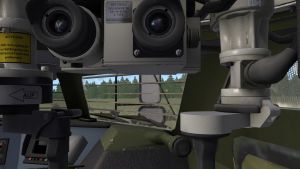 For the purpose of self-defense the Fennek series vehicles, depending of model, are equipped with either the Type 1530 overhead weapon station or FLW200 remote controlled weapon station. All in-sim Fenneks except for the SWP (which have only a launch unit for missiles) use the Type 1530 overhead weapon station exclusively. The Type 1530 weapon station can be traversed 360 degrees and elevated from -10 to +40degrees; it is manually controlled with hand cranks without gunner’s exposure to enemy fire or NBC agents. The Fire control system consists of simple day optics and an un-cooled thermal imaging module; both have a fixed 3x magnification. Due to its un-cooled nature, the quality of image and detection range of the thermal imaging module is rather low. There is no laser rangefinder or ballistic computer, only a simple ballistic reticle is used to apply proper superelevation and lead.

The weapon station, depending of vehicle’s role and version, may be armed with either a 12.7mm machine gun or 40mm AGL. Most in-sim vehicles have the weapon station outfitted with the 12.7mm M2HB HMG, while one of reconnaissance Fenneks is armed a MK 19 40mm AGL to simulate the German version of this vehicle. The thermal imaging module view is accessed with F2 key and the day optics with the F3 key.

While in OHWS thermal imaging module view, user can toggle image polarity (White-Hot/Black-Hot) with the Numpad - key or put the thermal imager in to stand-by mode with the Numpad + key. Note that the day optic does not have reticle illumination. Since overhead weapon station lacks powered elevation or traverse, user should use the UP ARROW and DOWN ARROW and LEFT ARROW and RIGHT ARROW keys to aim the gun. In all cases where the arrow pad is used for elevation and traverse, quicker taps of the arrow keys will result in faster sight movement. To fire the gun user should use SPACE BAR.

In order to prevent damage to BAA, there is a “No fire zone” where the mast is. The user can override this firing inhibition by throwing a circuit breaker to his lower right (on the panel between seat backrest and crew compartment access door). 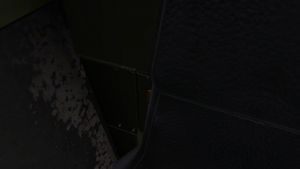 The overhead weapon station also has two vision blocks, which can be accessed with F4 key. 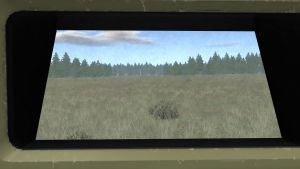 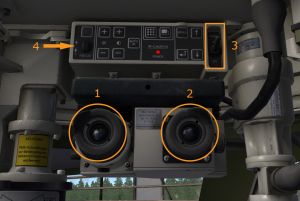 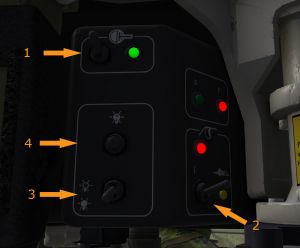 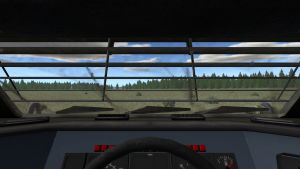 Driver’s position of the Fennek.

Although simplified, the driver’s position of the Fennek, unlike most vehicles, has an animated speedometer and fuel gauge. Also, a clickable master power button is available on the dashboard at right of the steering wheel, back-up camera display to the right of that, and a smoke grenade launcher control box is mounted on the roof above the right window. 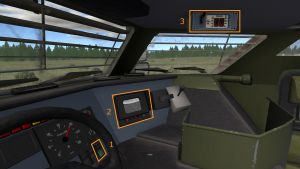 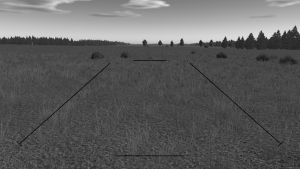 As is traditional for crewable vehicles in Steel Beasts Professional users in the driver’s position can drive vehicle by using either the joystick or W, A, S, D, and X keys. He also can also raise and lower their perspective (and exposure level) by holding the Q key (to go up) and the Z key (to go down) and button or unbutton (close and open the drivers's hatch) by pressing the B key (toggle).