Formations are used to establish sub unit positions and responsibilities and sectors of responsibility during tactical operations. They facilitate control, alleviate confusion, and increase protection, speed, and effectiveness of fires. (FM 17-15)

Formations are not intended to be rigid, with vehicles remaining a specific distance apart at every moment. The position of vehicle in the formation depends on the terrain and the ability of the wingman driver to maintain situational awareness in relation to the lead vehicle. At the same time, individual vehicles should always occupy the same relative position within a formation. This will ensure that the members of each crew know who is beside them, understand when and where to move, and are aware of when and where they will be expected to observe and direct fires. Weapons orientation for all vehicles should be adjusted to ensure optimum security based on the position of the platoon in the company formation. (FM 17-15) 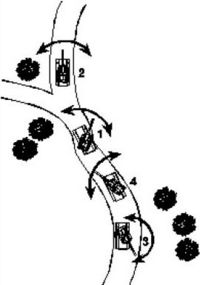 The column provides excellent control and fire to the flanks, but permits less fire to the front. It is used when speed is critical, when the platoon is moving through restrictive terrain on a specific route, and/or when enemy contact is not likely. Note, the TC of the last vehicle in column formation will focus his attention to the rear (rev. 2.443). The default keyboard command is Shift + ] to assume column formation. 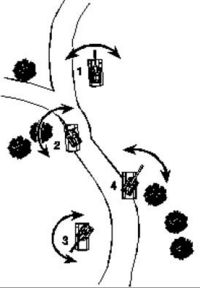 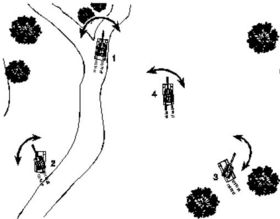 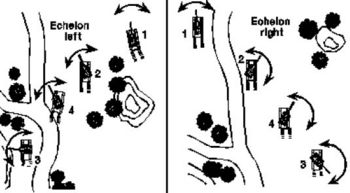 The echelon formation permits excellent firepower to the front and to one flank. It is used to screen an exposed flank of the platoon or of a larger moving force. The default keyboard commands are [ to assume an echelon left, and \ for the echelon right. 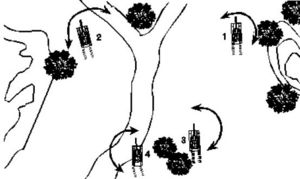 The vee formation provides excellent protection and control, but limits fires to the front. This formation is used when terrain restricts movement or when overwatch within the platoon is required. The default keyboard command is Shift + \ to assume the vee formation. 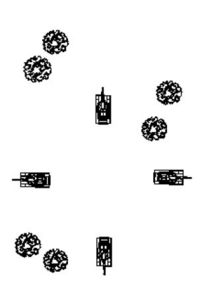 When it is operating independently, the platoon uses the coil formation to establish a perimeter defense during extended halts or lulls in combat. The lead vehicle, normally the platoon leader, will halt his vehicle in the direction of travel (12 o'clock) while the other vehicles position themselves to form a circular formation covering all suspected enemy avenues of approach. The coil formation lacks a keyboard command, but may be specified at any waypoint/battle position using the right-click>Set formation menu. 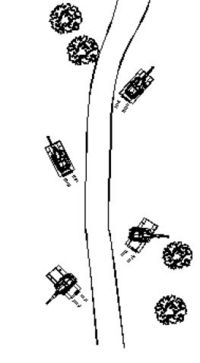 The herringbone formation is used when the platoon must assume a hasty defense with 360-degree security while remaining postured to resume movement in the direction of travel. It is normally employed during scheduled or unscheduled halts in a road march. If terrain permits, vehicles should move off the road and stop at a 45-degree angle, allowing passage of vehicles through the center of the formation. As with the coil, the herringbone lacks a keyboard command, but may be specified at any waypoint/battle position using the right-click>Set formation menu.

Unlike platoon formations, company formations are not "battle drills" and therefore not hot-keyed or even assumable by AI units without scripting, but since they are used to facilitate tactical objectives, it is important to understand their employment. 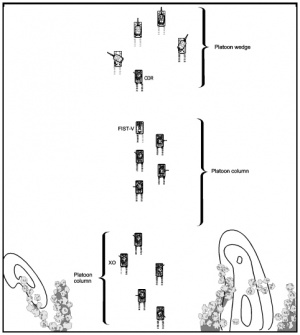 The company column is used when speed is critical, when the company team is moving through restricted terrain on a specific route, and/or when enemy contact is not likely. Each platoon normally follows directly behind the platoon in front of it. If the situation dictates, however, vehicles can disperse laterally to enhance security. 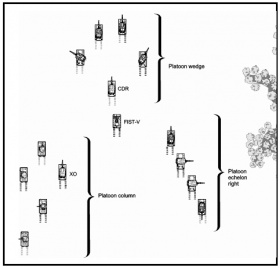 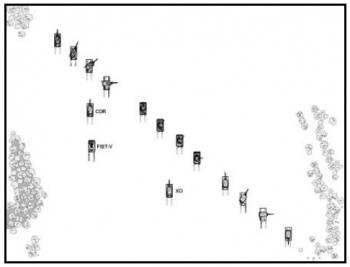 The echelon formation is used when the task force/regiment wants to maintain security and/or observation of one flank and enemy contact is not likely. The company team echelon formation (either echelon left or echelon right) has the lead platoon positioned farthest from the echeloned flank, with each subsequent platoon located to the rear of and outside the platoon in front of it. The company echelon affords excellent security for the higher formation in the direction of the echelon and facilitates deployment to the echeloned flank, but is difficult to control. 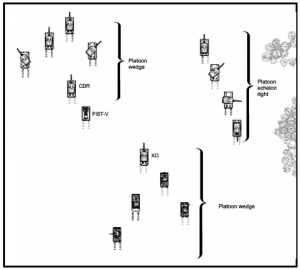 The company vee formation is used when enemy contact is possible. In the company vee, the center platoon is located in the rear of the formation, while the remaining platoons are to the front of and outside the center platoon. Although it permits more firepower to the front than the wedge and affords good fires to the flanks, the company vee is more difficult to control than the wedge and it is more difficult for vehicles to maintain proper orientation. As it facilitates rapid deployment into other formations and allows one platoon in the formation to maintain freedom of maneuver once contact occurs, the company vee is best employed when moving to attack and the enemy disposition is already known. 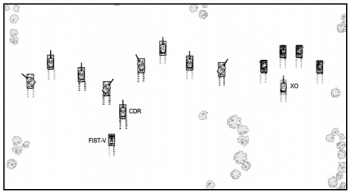 The line formation is primarily used when a unit or element is crossing a danger area or on the attack and needs to maximize firepower to the front. In the company team line, platoons move abreast of one another and are dispersed laterally.

The line formation provides maximum firepower forward, but is less secure due to the lack of depth, provides minimum fires to the flanks, and is difficult to control. It is typically used in the assault to maximize the firepower and/or shock effect of the heavy company team and is normally done when there is no more intervening terrain between the unit and the enemy, when enemy AT systems have been suppressed, and/or when the unit is exposed to artillery fire and must move rapidly.

Infantry Platoons and squads utilize similar formations to vehicular platoons, and for the same purposes. Although in reality, such formations are used all the way down to the section/fire team level, currently in Steel Beasts Professional PE infantry squads and sections will move using file formations while moving along routes with "march" orders, and loose line formations under all other orders. It is the responsibility of unit commanders and scenario designers to simulate higher echelon formations (i.e. platoon and company level) by using routes and control logic.