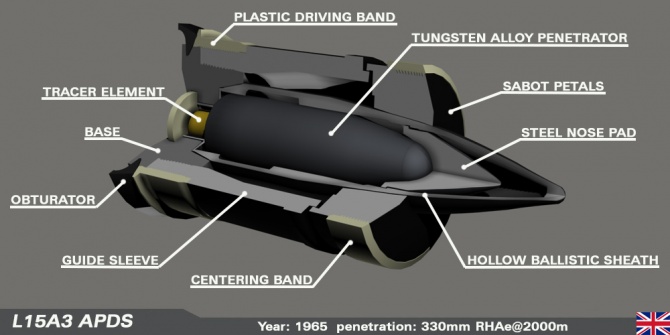 The L15 is a British APDS (Armour-Piercing Discarding Sabot) round developed by Royal Ordnance in the early 1960's for the L11 series of 120mm rifled tank guns. It consists of a W-Ni-Cu alloy (tungsten) penetrator with a steel nose pad and tracer contained within a steel ballistic shell, mounted inside a light alloy sabot.

When fielded in 1965, the L15 was arguably the most powerful kinetic energy round in service, able to defeat Soviet T-55 and T-62 tanks frontally at ranges beyond 2000m, but only capable against T-64A and T-72 Ural tanks frontally below 1000m. The round is, for practical purposes, ineffective against the frontal aspects of the later T-64B, T-72A, and T-80 tanks, but flank performance is acceptable. Despite these shortcomings, the L15 continued service into the early 1980's when the discovery of technical intelligence concerning Soviet armour capabilities lead to the rapid development and fielding of the L23 APFSDS round.

Exiting British service in 1985, as the principal anti-armour round for the Chieftain series, the L15 continued use with India, Iran, and Jordan well into the 1990's.