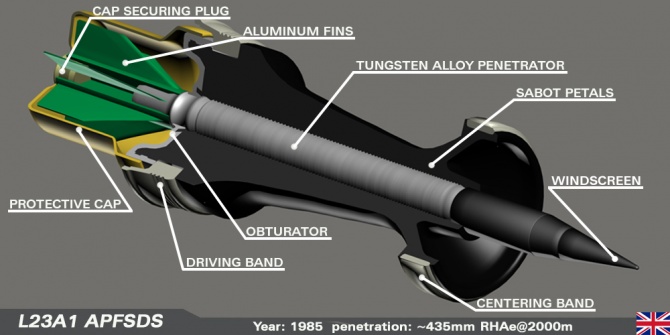 The L23 is a British APFSDS round developed by Royal Ordnance in the early 1980s for the L11 series of 120mm rifled tank guns to replace the L15 APDS. It consists of a tungsten alloy long rod penetrator, mounted inside a three segment aluminum sabot. A protective nitrocellulose cap covers the fin assembly and is secured to the round with a threaded plug, therefore the round carries no tracer element.

Fielded in 1985, the L23 was hurriedly developed after the discovery of technical intelligence concerning Soviet armour capabilities showed the L15 APDS to be ineffective against later generation Soviet tanks. Although a considerable improvement over the APDS round it replaced, against the tanks it was intended to defeat, the T-64B and T-72A, the L23 rapidly loses effectiveness at ranges beyond 2000m when engaging frontally. This poor performance is mostly due to a relatively short penetrator (similar in length to the German 120mm DM13 round), heavy aluminum alloy sabot petals, and low muzzle velocity. The modeled version is the L23A1, which replaces the W-Ni-Cu tungsten alloy penetrator with the higher density W-Ni-Fe tungsten alloy (18.6 g/cm3 versus 17.4 g/cm3), but is otherwise of identical construction. This modification increases the L23A1's overall penetration by approximately 30mm compared to the L23.

Although no longer in British service, the L23 family is still being manufactured by India, and in use by Iran, Jordan, and Oman.