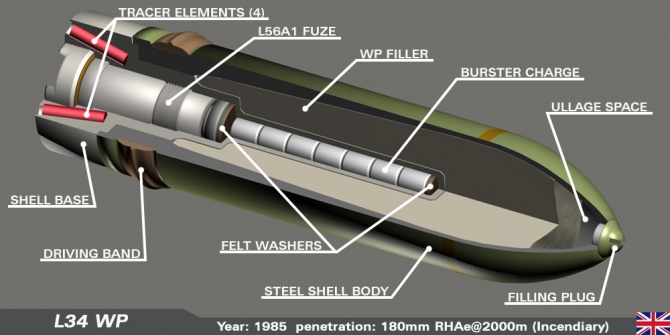 The L34 is a British white phosphorus (WP) round developed by Royal Ordnance in the early 1960's for the L11 series of 120mm rifled tank guns. It consists of a thin metal shell filled with a white phosphorus composition. It uses the same shell body, L56A1 fuze assembly, and four L7A1 tracers found on the L31 HESH round, but uses an extended base assembly with a seven element burster charge above the fuze well.

White phosphorus rounds, such as the L34, are used to produce targeted smoke screens, to mark targets for other elements, and as a potent incendiary device against structures and dug-in forces.

Although no longer produced in the UK, Great Britain retains large stockpiles of L34 WP and the round continues use with Britain, Iran, Jordan, and Oman.