Introduced with version update 2.538, the category "Line Objects" encompasses a series of walls, fences, and other linear structures available in the map editor. See also the "Obstacles and Fortifications" article for related map objects.

Note that the "Terrastan" map features some additional wall types which are not user-placable. 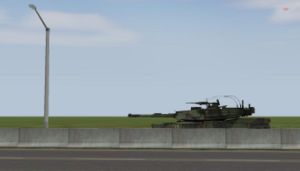 A Jersey barrier is a concrete or plastic modular barrier used to separate lanes of traffic, reroute traffic during highway construction, and - for military purposes - to provide temporary or semi-permanent traffic control and protection against vehicular attack, such as vehicle-borne IEDs. Typically, Jersey barriers are 81cm (32") tall. Beginning with revision 4.000 two versions of the Jersey Barrier is available to map makers: a “standard” barrier object (235) and a darker “damaged” barrier with chips and gouges (236). 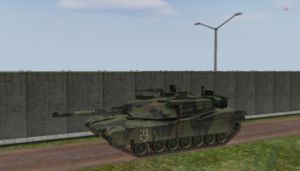 Similar in shape to Jersey barriers, Bremer walls are 3.7m (12') tall semi-portable reinforced concrete walls used for blast protection. Also known as "Texas barriers", these, along with the 6m (20') "Alaska barriers" are employed as perimeter walls on many Forward Operation Bases. This barrier comes in two flavors but they are different based on which version of Steel Beasts Professional is in use. Versions prior to 4.000 feature either a five panel section with a short sub-grade foundation or a foundation-less single panel section. After revision 4.000 both available sections lack a foundation but are differentiated by appearance with object 227 being “clean” and object 226 being “damaged” with a stained and chipped skin.

Single, double, and triple strand Concertina Wire obstacles may placed in the map editor as line objects which function identically to those which are constructed during runtime. Refer to the Obstacles And Fortifications page for further information.

Originally designed for erosion and flood control, HESCO Bastions are collapsible wire mesh containers lined with heavy duty fabric and filled with sand, soil, or gravel, and used by military forces as a barrier against explosions or small-arms fire. In Steel Beasts Pro PE, these come in two variants, a single-height and a double-height barrier.

Note that in the map editor, one additional row is displayed (the single height shows with two rows, the double-stacked barrier with 3 rows - in the game the lowest row is sunk into the ground to deal with eventual terrain irregularities.

There is also a HESCO “Fortified Guard Tower” map object (238) which fits very nicely with these bastions.

There are four types:

Added with version update 3.002, highway Guard Rails, also known "crash" or "traffic barriers", are used to protect traffic from roadside hazards, such as steep slopes, fixed objects, and bodies of water. Such barriers can also be used along medians to prevent vehicles from colliding with hazards within the median, or to prevent them from crossing into oncoming traffic. In these cases the barrier is set up to be struck from either side.

Walls come in multiple versions based on which revision of Steel Beasts Professional is in use. Versions prior to 4.000 features three variants: Brick , Flint and Brick, and a medium-height Rural Rock walls. Post 4.000 changes this in to four “groups”: Brick, Concrete, Mud, and Stone with multiple variations which are outlined below.

There are three variants:

There are six variants:

There are two variants:

There are four variants:

Added with version update 3.002, there are three variants:

Also added with version update 3.002, a hedgerow is a dense a hedge of wild shrubs and trees that typically border fields and roads.

The "wider" line objects do not fit too well on steeper terrain slopes, use the "short" versions instead: