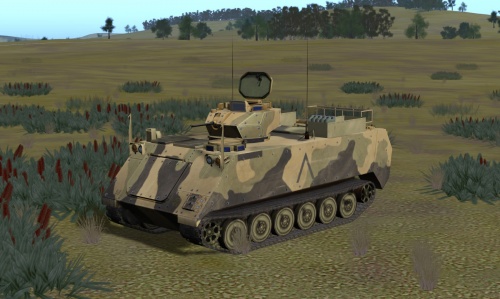 The M113AS4 is an upgrade to Australia's 1960's vintage M113A1 fleet under the Land 106 program and entered service in 2007. Equipped with a one man turret mounting a new .50 cal weapon, improved armour protection, spall liners, and enhanced mine/IED protection, the vehicle has been stretched .66m and gained an additional road wheel to increase capacity.

The armour is not particularly weak, as aluminium offers more protection for its weight than steel, but it is still vulnerable to most battlefield weapons above the HMG class. The electrically driven HMG turret provides protection, optical magnification, and a Thermal Imaging System. It can be used effectively for direct fire in support of its dismounted infantry, or in emergencies against other light vehicles.

Although air transportable by C-17 and possibly C-130, cross country performance is not sufficient to operate alongside modern MBTs, and, unlike the base M113 it replaces, the heavier M113AS4 is not amphibious. In Steel Beasts Professional the M113AS4 is crew-able at the Commander's (F7) and Driver's (F9) positions, but only partially modeled with no interior 3D views.

Carrying a two man crew and up to ten passengers, the default dismount section for the M113AS4 is 8 men, carrying 2 M72A4 light anti-armour weapons, a MG, and 5.56mm rifles. 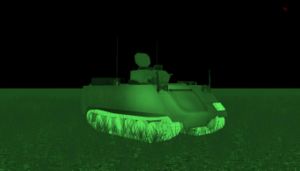 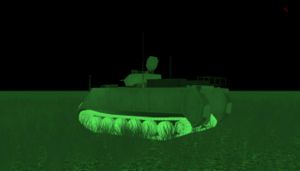