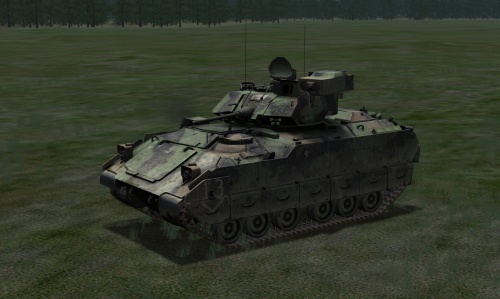 The M2A2 as it appears in Steel Beasts Professional

Introduced in 1988, the M2A2 is an up-armoured version of the M2A1 Bradley, itself a modification of the original M2 Bradley which entered service in 1981. The M2A2 upgrade included steel add-on armour in addition to the original aluminum armour (along with the ability to mount explosive reactive armor), an improved 600 horsepower engine, new transmission, a small bustle-rack on the turret rear, and Kevlar spall liners. The modeled M2A2 ODS (Operation Desert Shield) variant, is an upgrade of the Bradley based on lessons learned during the 1991 Gulf War. This version received a laser range finder and a new stowage configuration of the infantry with 2 benches to ease exit from the vehicle, along with some other minor modifications.

Beginning with version 3.002 of Steel Beasts Professional this vehicle is also available with Combat Engineering capacity, allowing it to mark cleared paths through mine fields, carry barrier material (concertia wire rolls), and construct wire obstacles in a manner identical to the M113A3 Engineer (rev. 4.000), along with the ability to tow a MICLIC trailer.

Beginning with revision 4.156 the M2A2 may be equipped with the Diehl Active Vehicle Protection System (AVePS) to enhance protection against RPG and ATGM threats. 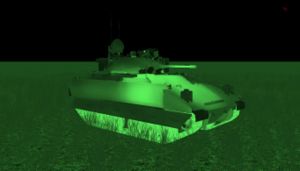 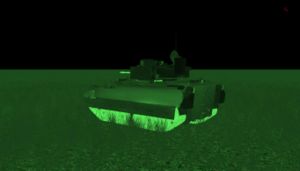 In Steel Beasts Professional the tank commander's (TC) position on the Bradley is fully crew-able and modeled. The TC's position is accessed by pressing F7.


From this position the user can raise and lower their perspective (and exposure level) by holding the Q key (to go up) and the Z key (to go down). The TC can also button or unbutton (close and open the TC's hatch) by pressing the B key (toggle). While unbuttoned, the TC may also wish to use binoculars to get a closer view on a distant area by pressing the N key (toggle).


The TC also has smoke grenades at his disposal. The TC can fire up to two smoke salvos by pressing TAB, at which point the grenade launches will need to be reloaded.

On some occasions the TC may need to look around the vehicle without having to spin the turret and without having to expose himself to hostile fire. The vision block view allows the TC to remain safely inside the vehicle and quickly scan around for close threats. It is most useful when enemy infantry are in the immediate area. Access the TC's vision block view by pressing F4. 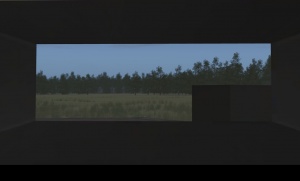 TAB: Pop smoke. Launches smoke grenades to deploy a smoke screen in the direction that the turret is facing. Useful for breaking up enemy LRF or completely obscuring your vehicle against a non thermal sight equipped threat.


P: Override. Hold to override the turret and use the joystick or mouse to move it.

N: Multipurpose zoom (toggle). When the TC is unbuttoned, this will bring toggle the binocular view. When the TC is inside the turret this key will make the TC lean forward, essentially zooming in on that spot in the turret.


LEFT ARROW / RIGHT ARROW: When in the TC's eye view F1, pressing these keys will cause the TC to face to the left or right of the main gun (turret).


INSERT: Fire, fire Sabot/KE. Orders the gunner to start engaging with Sabot/KE after the next round is fired.


DELETE: Fire, fire HE. Orders the gunner to start engaging with HE after the next round is fired.


SHIFT + PAGE DOWN: Reload all. Orders the crew to reload all weapons systems. 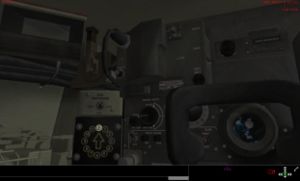 To the left of the gunner is the spirit level indicator (Alt-F2), which can be used to determine if the vehicle is on a surface flat enough to launch TOW missiles. Note that you can use the forward-left vision block to quickly check if your launcher is up, or you can look at the indicator lights on the TOW control panel to the right of the GPS. 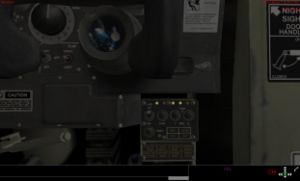 A bit further to the right is the turret clock, above it is the GPS ballistic shield lever (Shift-B), and next to it the TIS whot/bhot toggle (KP-), then the TIS on/off toggle (KP+). In front of the gunner is the primary sight's ocular. Somewhat hidden to the left of it is the manual range dial (Mousewheel), which can be used to set the range in 200m increments. Below this dial is the laser range finder's first/last selector switch (`). Note that the M2/M3 will remember both first and last ranges after a successful lase, so you can toggle between these two.

Forward-right of the gunner is the TOW control panel:

This gunner's primary sight (GPS) is the primary sight the gunner utilizes to engage and destroy targets. The GPS view is accessed by pressing F2.

In the gunner's daylight sight view the TOW reticle is always displayed (being etched into the sight itself). The reticle used to fire AP/HE/Coax is only displayed if any of these ammo types are selected, and the sight is in high magnification.

Note that the laser center point (that you should put on the target you want to lase) is the center point of the synthetic AP/HE/Coax reticle, not the center of the TOW reticle! This means that if you are in TOW mode and want to know the distance to the target, you will have to switch to another ammo type and move the sight off-target!

Additionally, the TOW may only fire in high magnification.

The range value displayed at the bottom of the screen will blink if the laser has multiple returns or the returned range is too large for the selected weapon:

The two vertical "funnels" passing through AP/HE/Coax reticle are the Air Defense Reticles used to engage hovering frontal or closing helicopter targets. The longer funnel is for HE rounds, while the shorter is for AP. To utilize the ADR sight the gunner manually inputs a range of 1800 meters, then "chokes" the fuselage of the enemy helicopter within the appropriate funnel and fires a continuous burst of 20 to 25 rounds (high rate), using the TOT (tracer on target) technique to adjust the rounds.

The gunner's auxiliary sight may be used if either the primary sight or turret power should fail and can be accessed by pressing F3. 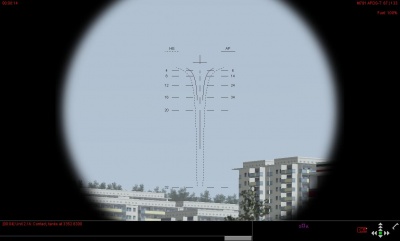 
To determine the range to a frontal target the gunner uses the half-stadia method. He aligns the center vertical ranging lines with one side of the target then "chokes" upward until the appropriate ammunition stadia line touches the other side of the target. 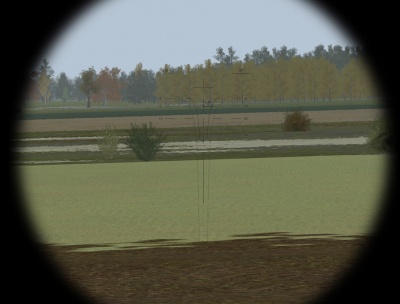 For a Flank target, both left and right stadia lines are used. 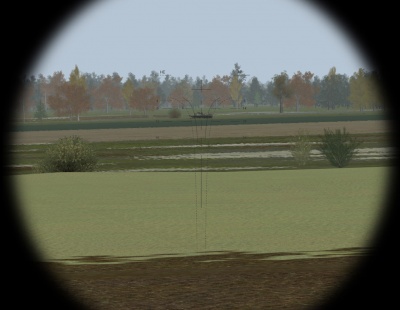 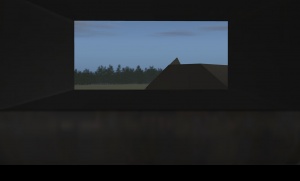 The gunner has two vision blocks which can be used as a way to look around the vehicle (specifically to either side of the main sight unit). The vision blocks are located to the front left and right of where the gunner is sitting and may be accessed by left clicking the mouse on them in the interior view or pressing F4 and using the joystick or mouse to move from block to block.


As noted above, the forward-left vision block can be used to check if the TOW launcher is erected as the launcher blocks most of the vision block.

P or Joystick Button 3: Disengage palm switches. Press to release the palm switches and disengage hydraulic power to the turret. This is done mainly to dump lead in the ballistic computer.


CTRL: Lase. Lases the target or area currently in the GPS reticle.


+ (num pad): TIS / daylight (toggle). Toggles between the daylight and TIS filter in the GPS sight.


INSERT: Sabot/AP indexed. Places the ammo selector switch on sabot, indexing that round type in the ballistic computer.


DELETE: HE indexed. Places the ammo selector switch on HE, indexing that round type in the ballistic computer.

T: Identified! Tells the TC that you have located a target and that you are going to engage it. Essentially it tells the AI TC to leave you alone while you engage and forbids the AI from overriding you to another target. Use at your own risk.


I: I can't see it! Tells the TC that you cannot see a target or the one he is commanding you to engage. Essentially it tells the AI TC to override you on to a target that it wants you to engage.

Pressing F11 accesses the squad leader's position in the vehicle's troop compartment. From here the user can control the carried infantry squad independently from the Bradley, but is limited to unloading (U) and loading (SHIFT+U) when interacting with the vehicle. 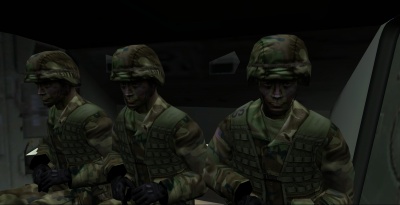