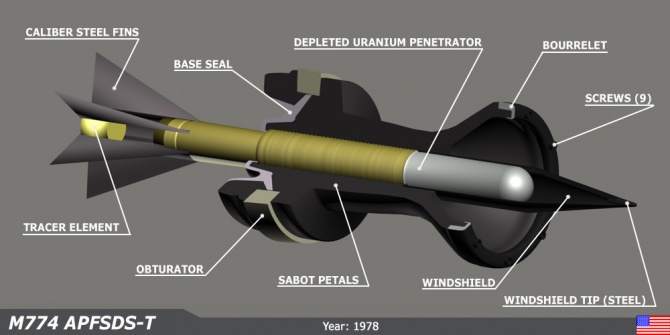 The M774 APFSDS round is a further development by the Armaments Research, Development and Engineering Center at Picatinny Arsenal and the Department of Energy's Battelle Pacific Northwest Laboratories to improve performance over the M735 APFSDS-T while reducing complexity compared to the depleted uranium cored M735A1 APFSDS-T. It consists of a monolithic depleted uranium penetrator with a aluminum windscreen and steel windscreen tip, mounted inside a three segment aluminum sabot. A steel bourrelet is secured to the face of the sabot petals with screws and the aluminum fin assembly is fitted with an M13 tracer element.

Fielded in 1980, the M774 served as the U.S. military's primary wartime anti-armor round until superseded by the M833 APFSDS-T in 1983. The M774 is capable of penetrating the frontal aspects of the T-62, T-64A, and T-72 Ural beyond 2000m but will be challenged by the T-64B and T-80A/B at the same ranges. The round is marginal against the frontal turret aspect of the T-72A, but the T-72B is effectively invulnerable to the M774. Flank performance remains acceptable regardless of target.

Despite being supplanted by the M833, the M774 continued in front line service into the early 1990s, particularly in Korea, and would have been standard issue for deploying units drawing from POMCUS (Propositioning Of Materiel Configured in Unit Sets) stocks in cold war gone hot scenarios after 1984.