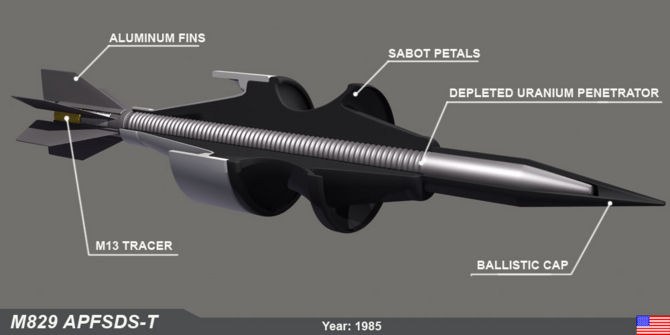 With the adoption of the Rheinmetall 120 mm L/44 smoothbore gun by the US Army for the M1A1 Abrams MBT, it was decided to focus on development of long-rod penetrators to take advantage of the smoothbore's qualities. Based on extensive modeling done by the Ballistic Research Laboratory (BRL) at Aberdeen Proving Ground (now the Weapons and Materials Directorate of the Army Research Laboratory) throughout the 1970's and new processes developed by Battelle Northwest Laboratory in the mid–1980s, a Depleted Uranium (staballoy) penetrator was chosen to enhance anti-armor performance compared to tungsten. Initally, Honeywell (now Alliant Techsystems Inc (ATK)) created the XM827 based on the Rheinmetall DM13. This round used a one-piece DU penetrator sheathed in a maraging steel body in place of the original two-piece tungsten design. Although type classified in early 1983, the XM827 was accepted as an interim design only while development continued on what would become the M829. Further R&D and collaboration between BRL; the Armaments Research, Development and Engineering Center at Picatinny Arsenal; and ATK resulted in a round that retained the original Rheinmetall-derived propulsion unit while carrying a longer and heavier penetrator than either the XM827 or DM23.

Formally type classified in late 1984, the M829 served as the U.S. military's primary wartime 120mm anti-armor round, and proved very successful against Iraqi T-72s in 1991, but the round suffered several issues during its service life. The case shoulder joint, secured with specialized glue, could separate after prolonged exposure to high temperatures, leading to propellant spills. Also, the spring clip which secured the stub base to the cartridge body proved insufficient when attempting to manually extract rounds from a hot gun, resulting in propellant spills and turret fires. The M829 was supplanted by the M829A1 in 1988, but because of the high number of rounds produced, the M829 continued as the U.S. Army's basic overseas contingency round into the late 1990's.