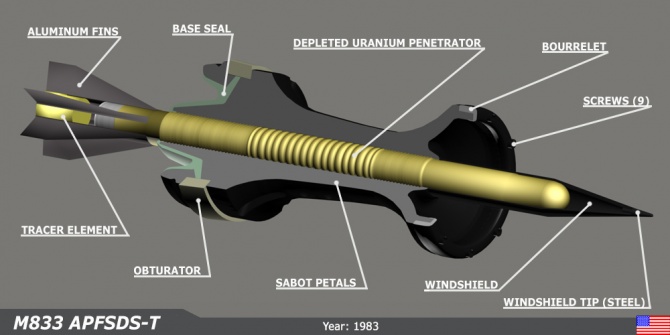 The M833 APFSDS-T is a U.S. 105mm round fielded in 1983. A further development of the M774, it consists of a monoblock depleted uranium core with a aluminum windscreen and steel windscreen tip, mounted inside a three segment aluminum sabot. A stainless steel bourrelet is secured to the face of the sabot petals with screws and the aluminum fin assembly is fitted with an M13 tracer element which burns for about 2.5 seconds. The round's obturator is modified over that of the M774 to reduce projectile spin by approximately 80%.

Introduced in 1983, the M833 served as the U.S. military's primary wartime 105mm anti-armor round through the end of the Cold War. Featuring a roughly 11% increase in overall penetration compared to the M774, the M833 is capable of penetrating the frontal aspects of the T-62, T-64A, and T-72 Ural beyond 2000m and is adequate (70th percentile) against the T-64B, T-72A, and T-80A/B at the same ranges. The round is marginal against the frontal turret aspect of the T-72B beyond 1500m and later Russo/Soviet tanks equipped with Kontact 5 reactive armor suites are effectively invulnerable to M833. Flank performance remains acceptable regardless of target.

Although technically supplanted by the M900 APFSDS-T round, the M833 continued in front line service well into the late 1990s and early 2000s when the last of the 105mm armed M1 series tanks were withdrawn from National Guard service.