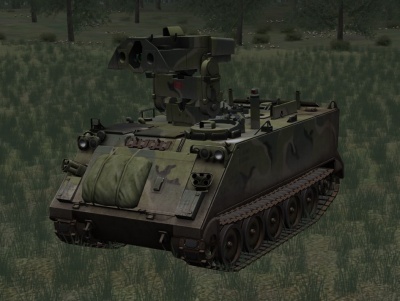 The M901 as it appears in Steel Beasts Professional

Introduced in 1978, the M901 Improved TOW Vehicle is a modification of the venerable M113 series of APCs. Equipped with the M27 powered cupola and a two missile Emerson (now Systems & Electronics Inc, or SEI) "hammer head" extensible launcher, the ITV can engage targets from a protected defilade position, with only the launcher exposed. The modeled version is the M901A1, capable of firing all versions of the TOW missile, though it lacks the laser range finder and second-generation thermal camera included with the TOW 2 "Improved Target Acquisition System".

Replaced in U.S. service by the Bradley fighting vehicle in the early nineteen-eighties, the M901 series continues to serve in the armies of several middle-eastern and Asian countries. 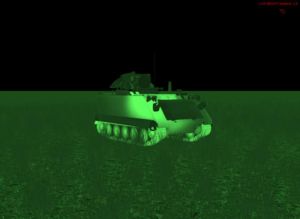 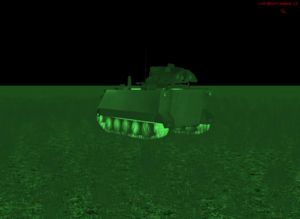 In Steel Beasts Professional the tank commander's (TC) position on the M901 is crew-able. The TC's position is accessed by pressing F7. 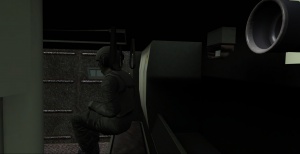 Wedged between the gunner and driver, the TC has actually only his periscope to view the outside world. He does not have a hatch to look outside, and neither does his position feature vision blocks.

The commander's periscope is used for target acquisition, range estimation, directing the gunner onto a target. Though it can be rotated 360°, because of the launcher, it only has a 270° field of view and is limited to a day channel and only one magnification level.

In the center of the view are range estimation stadia lines: the inner two vertical lines are 3 mils apart, the outer two 8 mils.

Note that the TC has no way of overriding the gunner - he can only give verbal commands and hope that the gunner picks up the right (or any) target.

The gunner controls the "hammerhead" launcher which holds the TOW sight assembly as well as two missiles. 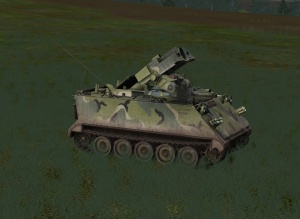 From this position the user can raise and lower their perspective (and exposure level) by holding the Q key (to go up) and the Z key (to go down). The gunner can also button or unbutton (close and open the hatch) by pressing the B key (toggle). While unbuttoned, the gunner may also wish to use binoculars to get a closer view on a distant area by pressing the N key (toggle).
Note that while reloading the hatch has to be closed.

The gunner's M27 cupola has eight large direct vision vision blocks, allowing the gunner to remain safely inside the vehicle and quickly scan around for close threats; being most useful when enemy infantry are in the immediate area. Although not "accessible" as with other vehicles, they offer a relatively wide field of view and are quite useful from the F1 eye view. 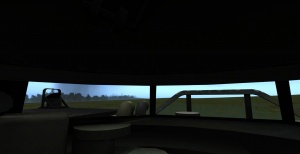 When buttoned up, the driver views the world through 5 vision blocks set in the roof of his compartment. From this position the user can raise and lower their perspective (and exposure level) by holding the Q key (to go up) and the Z key (to go down). The driver can also button or unbutton (close and open the driver's hatch) by pressing the B key (toggle).