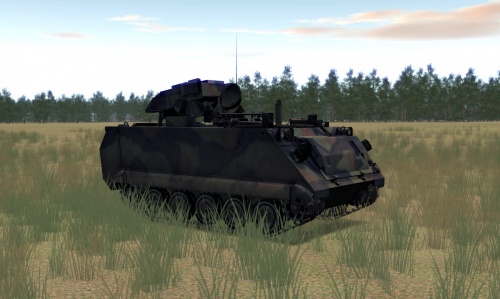 The M981 Fire Support Team Vehicle (FIST-V) is a modification to the M901 ITV that entered service in 1984 to provide mobile artillery observation to mechanized infantry and armored units.

In place of the M901's twin TOW launchers, the FIST-V carries a Ground/Vehicular Laser Locator Designator (G/VLLD, generally pronounced "glid"). The G/VLLD allows the M981 to locate target coordinates by measuring distance, elevation, and azimuth to an aim-point with respect to the G/VLLD's location (polar plotting) and to designate stationary/moving targets for precision guided munitions. In addition to the G/VLLD the M981 also carries a single Dismountable FO team.

The M981 is fully crew-able (driver, TC, and dismount team) but only partially modeled with no 3D interior views. 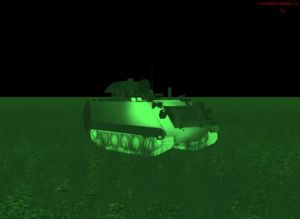 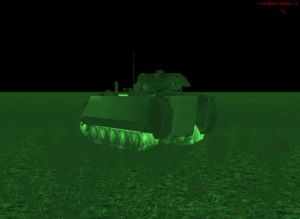 In Steel Beasts the tank commander's (TC) and gunner's position on the M981 are consolidated as a single crew-able station accessed by pressing F7.


From this position the user can raise and lower their perspective (and exposure level) by holding the Q key (to go up) and the Z key (to go down). The user can also button or unbutton (close and open the hatch) by pressing the B key (toggle). While unbuttoned, the user may also wish to use binoculars to get a closer view on a distant area by pressing the N key (toggle).


As with the M901 ITV, the M981 is equipped with a Squad Leader's Periscope, but this device is not modeled. Instead the commander controls the "hammerhead" which holds the G/VLLD sight assembly.