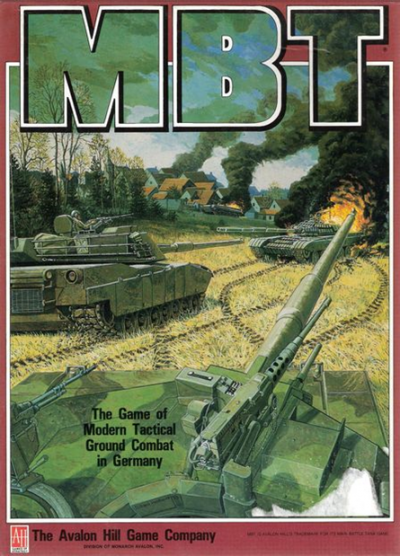 MBT 87 is a simple linear multiplayer campaign created by Volcano. MBT 87 is a set of scenarios based on the Avalon Hill and GMT Games boardgame "MBT".

The scenarios are all stand alone battles, with each taking place on a specific day in the campaign in sequence, and following the flow of the hypothetical conflict. Also, the scenarios cover different sectors along the front, covering US, West German (FRG), and British (BAOR) forces.

Theme: Cold War, 1987
Scale: One or two companies per side (4 to 6 players per side)
Time limit: 120 to 180 minutes maximum (the focus is on allowing for plenty of time, although scenarios seldom go to the full limit)
Scenario complexity: Moderate

The scenarios are scaled to the boardgame so that the scenario time limits are as correct and realistic as possible. This means that scenarios typically have long time limits (from 120 to 180 minutes), but always have early termination possible. This allows for a more realistic battle to develop, where the attacker can properly develop the situation rather than rush into it recklessly, but still allowing the scenario to typically end earlier if too many losses are sustained.

Unlike the Firefight 79 campaign, the conversion of the MBT scenarios into SB scenarios was done very carefully and faithfully, at a 1:1 scale of the units and time scale.

Any units that are not playable (like the T-80U) or available (like the M2A1) in SB are then compensated for by adding or subtracting appropriate strength to that side, using the MBT boardgame's integral "points" system (where each vehicle type is worth a certain amount of points), converted into SB's "unit cost calculator". This helps to increase the likelihood to remaining faithful to the boardgame's original scenario balance.

The scenarios feature real world equipment and ammunition that was available in 1987, being faithful to the boardgame's scenario TOE as much as possible. Also, somewhat unique are the scenario's scoring conditions which, like real life, places more emphasis (points) on friendly and enemy losses to the degree that the objectives are not a majority of the total points. Additionally, also unique is that the points for losses will often differ for both sides, being based on the forces involved (the superior side has more points to lose from losses).

Morale is modeled, faithful to the boardgame's scenarios, where a side will break (retreat) if a certain level of losses are sustained. This is translated into a % strength condition, based on the unit's quality (in the original boardgame's scenarios) so that a side will retreat if the "Break Point" is achieved, resulting in an early termination of the scenario (an "end if" condition, allowing the scenario to end before the time limit). The scenario will typically end before the time limit due to losses.

Given the later Cold War time setting, NATO forces are technologically superior but the Soviets also have use of FASCAM and ICM, and good quality ammunition. The Soviets typically have superiority in numbers and also (or at least even parity) in ammunition, fire support, and supporting assets.

Just like in the Firefight 79 campaign, the scenarios are set to intentionally cheesy 1980-90s era Cold War movie theme music for nostalgia.

In the MBT 87 campaign, a set of Cold War scenarios set in 1987 are played in sequence, and a score is totaled at completion to determine a winner. The NATO side accumulates positive points, while the Soviet side accumulates negative points, and these cancel each other out. By the end of the campaign, if the final score is +500 or greater, then the result is a NATO Victory, or if it is -500 or less it is a Soviet Victory, and anything in between is a Draw.

If the Total Scenario Score (not including awards) for the US side is > +1500 points or for the Soviet side is < -1500 points at the end of TWO consecutive scenarios, then that side wins and the campaign ends early in a Major Victory for that side.

NOTE: This is not absolute; as long as a side is within ~100 points of that range, then they will stay in the fight.

There are 16 scenarios in the MBT 87 campaign, although only 9 total scenarios are played:

NOTE: The "A" version of the scenarios are a NATO attack, while the "B" versions are a Soviet attack. As mentioned above, the first and last scenarios neither have an "A" or "B", they are neutral meeting engagements.

This is a unique two-part scenario, a mini-campaign within the campaign. Therefore, keep in mind that if scenario MBT-S06A-20-Counterstroke (FRG) is played (below) then West German units in that scenario will continue from the end state of this scenario.

After playing each scenario, participants may gain awards. These are mainly "just for fun" but also they can be used to slightly influence the campaign score. The intent is to reward participation, positive behavior, and good performance. These award names are fictitious, although their artwork and name are based on actual military decorations.