The map screen appears in all phases of the simulation, as well as in the mission editor, so it's important to become familiar with it. Most tasks in the map screen are accomplished through context sensitive menus that appear by right clicking on objects in the map or on the map itself. This section will concentrate on the map screen as it appears in the planning, action, and after action review phases, leaving the mission editor for later. (Note that the map editor has a different user interface, so do not get confused.) 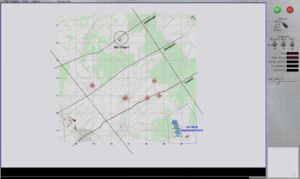 The controls are placed on a control panel, situated on the right side of the map screen. The first control to learn is the Display Selector, located near the upper left part of the control panel. The Display Selector determines what will be shown in the display window of the map screen: the terrain map, the line of sight (LOS) map, the briefing display, the summary display, or the score display. (Not all of these choices are available in every phase of the simulation.)

Move the slider to the left to zoom out. And to the right to zoom in. Number indicates the current magnification level.

The Overlay Switches control what information is displayed in the terrain or LOS maps. The map screen can be quite cluttered for some missions, so using these overlay switches wisely can help reduce that clutter while still showing the desired information

The Info Overlay Switch controls whether informational lines, regions and text are shown on the map

The Arty Overlay Switch toggles the display of both the ﬁre and obstacle plans.

The info area shows the mission start time, the H-Hour (used to facilitate artillery fire plan development training. You set the H-hour in the mission editor, Options menu. H-hour can also be referenced in conditionals, like Mission time and Incremental time), the length of a selected route in the planning phase and the coordinate and elevation of the cursor’s current location within the terrain or LOS map.

Standard map view. Using this mode one can view the basic map and any graphics and units placed there. 90% of your time spent in the map screen will be using this view.

In this mode one can employ the Line Of Sight calculator used by this program. Place the cursor on the map by right clicking anywhere on the map and select 'LOS from here'. The program will then calculate all positions visible from the mark, these are displayed in white, which indicates a turret down position for a MBT, and red, which indicates a fully exposed position.

The Brieﬁng, Summary and Score displays all show text in the display window.