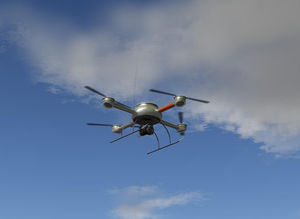 With revision 3.002, dismounted infantry platoons (mechanized, leg, and air assault) may be equipped with a micro, unmanned aerial vehicle (a.k.a. Sensocopter) which can be remotely controlled to provide local battlefield surveillance. Similar in purpose to the UGV, it consists of a small X-shaped quad-rotor airframe (with one arm painted orange to denote the vehicle's "front"), and carries a fixed magnification, single-channel HD camera. The drone's horizontal control radius is ~500m, but operators should be cautious when flying near this limit as excessive speed or radical maneuvering may result in a loss of signal and the inability to recover the drone. Flight endurance is 15 minutes, with a top speed of 15knots, and a maximum ceiling of 2999m (9840'), but due to terrain fadeout and the need to identify ground targets, a more reasonable 450m (~1500') maximum is recommended. Like its larger cousin a heading indicator, along with speed, altitude, and grid location is displayed along the top of the camera view. Note that due to its small size and low noise signature, enemy units are set to ignore the m-UAV's presence. 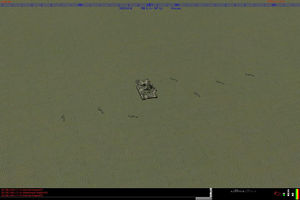 If a squad is so equipped (the m-UAV has to have been "given" to the infantry in the mission editor), hit Shift+T to deploy the unit while dismounted from the F7 squad leader view. F2 switches to the "remote controller view", allowing your WASDX commands to steer the UAV and not the squad. F3 accesses the UAV's camera view. Either the mouse or joystick controls vertical camera movement with an approximate 80° of vertical pan. Horizontal panning, along with steering, is accomplished by turning the vehicle with the A and D keys. As magnification is fixed at 1x, the N or Shift+N zoom keys have no function. W and X control forward and reverse movement respectively, and S stops the craft. Q and Z control altitude, and Alt+T recovers the m-UAV (must be within 20m of the squad). 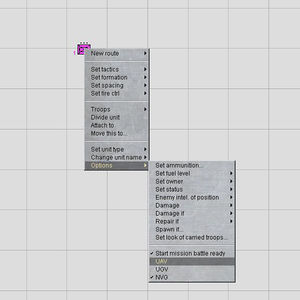 Equipping a PC platoon with the m-UAV