NOTE: This is the original v1.0, with larger unit scale.

The Operation Coin 1 campaign is in development and has not begun.

The Republic of Bekibekibekistan has seen constant conflict throughout its 50 year history after a violent uprising overthrew the peaceful government and established a hard line dictatorship.

In the end of 2015, a bloody border war with its northern neighbor Redistan ended in a ceasefire, and international sanctions ensued after the Republic of Bekibekibekistan was found to have both instigated the conflict and carried out numerous acts of terror inside Redistan's borders.

As sanctions took hold, the Republic of Bekibekibekistan struck back at the international community by conducting terrorist attacks abroad, in various western nations around the globe.

Responding to the attacks, a NATO contingent was sent to the region and established itself in Babanusah Province. Once established, it began the complex task of overthrowing the extremist government in order to bring peace and stability to the region.

The peace loving Republic of Bekibekibekistan has been constantly oppressed by its neighbors throughout our glorious 50 year history after the revolution.

Following our magnificent victory against Redistan in 2015, the international community, jealous of our great victories against Redistan, enacted sanctions for no reason other than to bring suffering to the people of our peace loving nation.

In retaliation to these injustices, we attacked them in their homelands to remind them that no hostility against our glorious homeland will go unpunished.

Imperialist forces have now invaded our sacred land, establishing themselves in the Babanusah Province. They intend to overthrow our legitimate government that was elected by 100% of the population, and to replace it with a corrupt and illegal puppet government. We must drive the imperialist forces from our homeland!


BABANUSAH PROVINCE: All BLUE MUs. SUPPORT.
All other provinces: ORANGE CUs placed as desired. OPPOSE.

(Click on maps below to go to image page, then click it again to go to full screen, then again to zoom in to full size.) 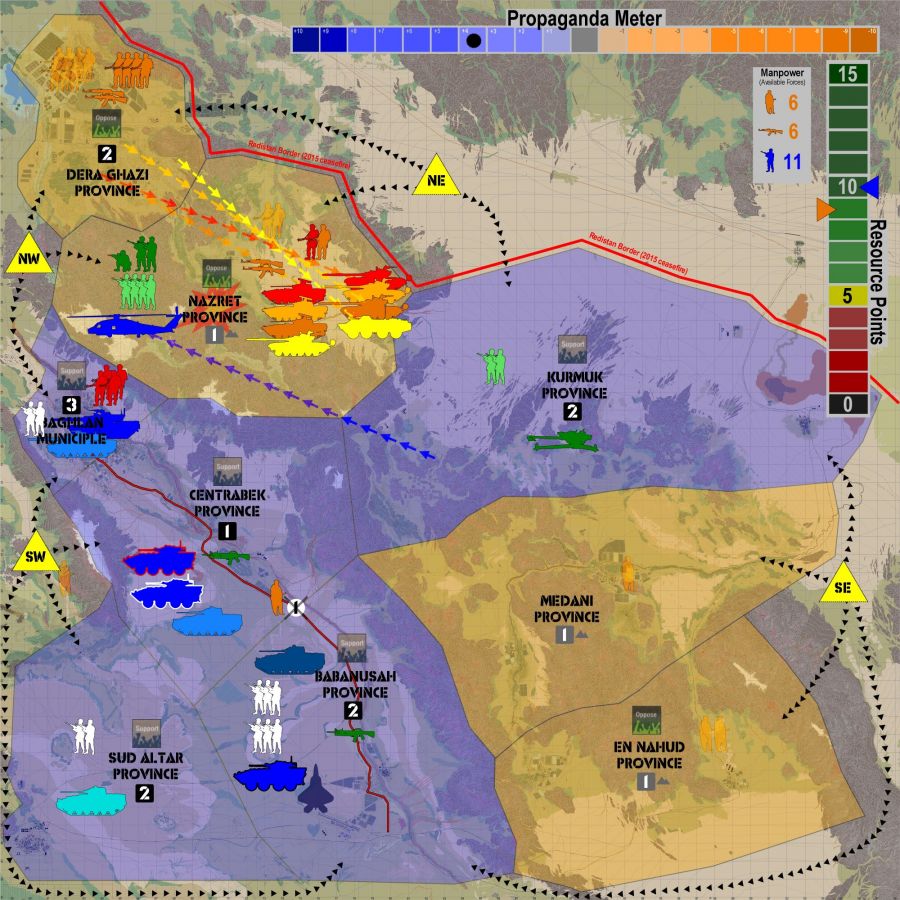 The following is a running list of operations that were conducted during the campaign in the order in which they were executed (specific locations are mentioned in parenthesis).

The following is a running list of manually resolved battles that were conducted during the campaign in the order in which they were executed (specific locations are mentioned in parenthesis).

Table of Organization and Equipment (current)