Operation Variable is a campaign created by Tacbat. 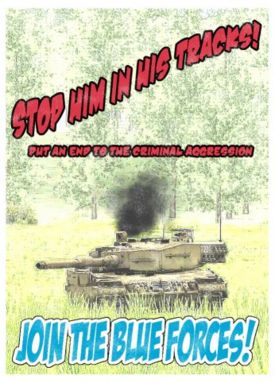 The campaign will usually be fought over 3 maps, but there is the option of extending it to 5 maps if it proceeds very quickly. The first map will be the one in the middle, with the second one to the east, and the third to the west and so on:

The HQ’s will be located on maps 2 and 3 (or 4 and 5 if the campaign is extended) The HQ element will consist of 2 x Ural trucks and 2 x M113/FO APC’s. The HQ will be stationary during the mission, but can be repositioned between missions. They will be under AI control and all vehicles will be within approx 700m of each other. The HQ can be repositioned once during the mission, to an alternate location that must be within 5km of their initial position. Their movement will be enacted via trigger. CO’s are to designate both the primary and alternate locations for their HQ.

The maps will be chosen from different Steelbeasts maps, so the terrain (and seasons) can vary between maps. CO’s may recommend which map they would like to fight on once the battle switches to their side (Map 3 – CO Red can decide, Map 2 – CO Blue can decide). CO’s may even submit custom made maps for consideration.

Moving to a side map will occur when the CO of a given side decides that he can no longer hold the current map at the end of a scenario. When this happens, the side that withdraws will control roughly 60% of their side map. The other 40% percent will be made up of a deployment zone for the opposite side, and an area of no man’s land. The withdrawing side also gains one extra company (free) of reserves to bolster the defenses.

An artillery bonus of 6 tubes will be given to the side that falls back to a map that is closer to their home base. In the example above, the Blue side would receive the extra artillery since the battle has shifted to map 2. Red’s artillery would remain unaffected. Should the battle return to map 1, then Blue would lose their artillery bonus.

The side that falls back to a map that has their HQ located on it, will receive a defensive bonus of 1000 points specifically for the purchase of obstacles, fortifications and pre-plotted arty or FASCAM. Obstacles may be placed anywhere in friendly held territory, except not within 2km of the friendly front line. FASCAM and arty can be plotted anywhere on the map. These points may be saved for later.

The side that gains control of a map will receive a one time bonus of 2000 points which can be spent on anything the CO requires. They will also be given half the points for all objectives that were not under their control at the end of the mission.

The attacking side will not have to deploy its echelon onto the new map until the second battle on the new map. This will allow the attackers to gain some ground before exposing their echelon to the fighting.

Missions will run for 70 min +/- 5%. Not all objectives need to be taken in one mission.

Territory that is controlled at the end of the mission will be the boundary for the deployment zone (DZ) for the following mission. Smaller DZ’s may be constructed inside the controlled territory to allow for local repositioning of forces. Units that find themselves behind enemy lines will be given their own smaller DZ, unless the CO wishes to redeploy them back to friendly held territory for the next scenario. Spec Ops teams, airborne and air mobile infantry cannot be redeployed back to friendly held territory. They must either move there on their own, or wait until the friendly boundary moves past them.

Points will be awarded for securing objectives detailed in the mission briefing, and according to the scoring table below. These points can then be used to purchase resources according to the cost table for the next mission at the discretion of the CO or his delegated representative. Points may be saved for later battles. Units that survive a battle cannot be “cashed in” for their point value, and spent on another unit for the following mission. CO’s may agree between each other to increase the point allowance, as long as both sides receive the same amount. An Excel spreadsheet has been created to facilitate the calculation of the point system.

They will start in their own deployment zone along the friendly edge of the map, and must be brought forward into battle. Only surviving forces can be repositioned in the deployment zones closer to the front. Newly purchased infantry units may be deployed anywhere within friendly held territory.

The number of infantry units either side can have at the beginning of a mission is limited to 10. This can be a combination of a Rifle Squad/ATGM/AGL/MG teams and Special Ops Team. This is to reduce the amount of infantry on the map which will also help to minimize lag issues.

Helicopters will always be under AI control. Routing will be decided by the CO, and implemented by the Campaign Coordinator. Any troops that are dropped off by helicopter will stay on the map, and cannot be redeployed by chopper until they are behind the friendly territory boundary. CO’s may buy new infantry sections and drop them off in follow-on missions.

The term "obstacles" is used to refer to any sort of defensive fortifications including minefields, steel beams, and IEDs.

Obstacles can only be placed in friendly territory that is held at mission end.

Obstacles must be in friendly territory at mission end for them to be completely removed.

The BMD-2 and Airborne Platoons can be parachuted onto the map under the following conditions:

In order to successfully secure an objective, a combat ground unit must be inside the objective area at mission end. Support units and helicopters cannot hold objectives. If both sides are inside the same objective area, then the precedence will be tanks/IFV’s/Infantry. One tank will win over any number of IFV’s and infantry. One IFV will win over all infantry. If there is a tie, then the next lower unit will be taken into account.

When a side gains an objective, they will receive the points for it. Points will only be awarded to newly captured objectives. Objectives that were controlled in a previous mission do not count again, and therefore friendly units don’t need to reoccupy them.

The CO can change from mission to mission, but whoever occupies that position has the following after action responsibilities:

Players are asked to choose a side for the duration of the campaign. Should there be an imbalance of players on TGIF, then the CO of the side with the greater number of player will decide who to lend the side who is short players.

Comments and suggestions are welcome, however final decisions rest with the Campaign Coordinator.