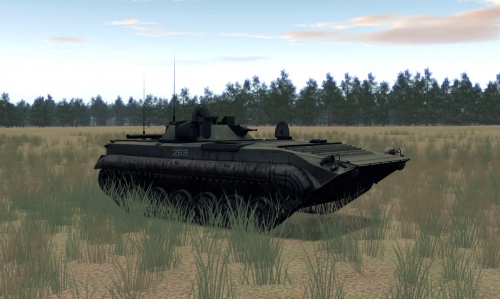 The PRP-3 in Steel Beasts Professional

The PRP-3 (podvizhnoy razvedyvatel’niy punkt – mobile reconnaissance post) is an artillery reconnaissance vehicle based on the BMP-1 that entered service with the Soviet Army in 1970. Armed with one PKT machine gun for self-defense, and equipped with a 1RL126 "Small Fred" counterbattery/surveillance radar, LRF, long range day/night optics, and a 90mm 2P130-1 launcher with 20 9M41 illumination rockets, the PRP-3 is capable of performing artillery/guided missile target designation, fire adjustment, and artillery/mortar locating missions. In Steel Beasts Professional this unit acts as a basic FO vehicle. Typically, one PRP-3 is assigned to each artillery/guided missile battalion (towed or self-propelled) in a given Motor-rifle or Tank Regiment, although only one is assigned to the target acquisition battery of an Artillery Regiment.

For scenario design purposes, the PRP-3 will generally be assigned to function as part of one or more forward observation posts (FOP) to supplement the artillery battalion's command observation post(s) (COP). At the battery and battalion levels, the FOPs contain the intelligence officer (or headquarters platoon leader), a scout, and a radio man. An FOP may co-locate with the supported unit commander or with one of the advance maneuver elements and assures continuous close fire support for the maneuver forces when the COP is displacing. In the offense, the PRP-3 may advance closely behind or intermixed with the lead motorized rifle or tank elements, conducting reconnaissance and fire missions on the move or during short halts. During a march, the unit will move as part of an artillery reconnaissance patrol in the forward security element of the supported motorized rifle or tank unit; while in the defense, the PRP-3 may form part of the combat outposts in the forward security zone.

Note: Although actually equipped with illumination rockets, illumination type rounds are not yet implemented in Steel Beasts Professional and so have been temporarily replaced with smoke rounds. 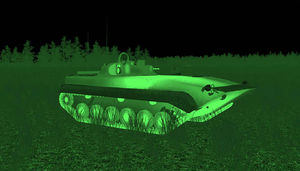 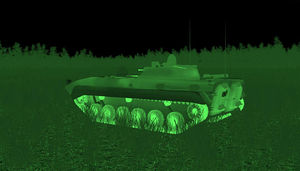