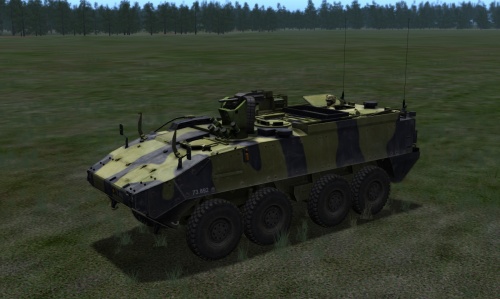 A larger version of the Mowag chassis used on the other LAV series vehicles, this PC is in service with Spain, Belgium, Denmark, Sweden, Switzerland, Brazil, and Romania. The principal differences between the Piranha IIIC and Piranha IIIH lies in the engine and suspension systems. Whereas the H version has an independent torsion bar suspension all around, the Piranha IIIC uses coil springs up front and torsion bars in the rear, and comes equipped with a version specific 400hp, 6-cylinder Caterpillar C-9 EURO III engine. Steel Beasts Professional models four versions of the Piranha IIIC: the basic MOWAG APC variant, the Belgian Piranha FUS APC variant, and a “TACP” tactical air control party vehicle (found under the “Artillery” category in the Mission Editor), along with the Belgian DF30 and DF90 direct-fire infantry support vehicles.

All crew stations (driver (F9), gunner (F6 when a RWS is mounted), commander (F7), and squad leader (F11)) are modeled and may be occupied by the player.

Though the base vehicle is unarmed, the Piranha IIIC may be equipped with either the Lemur, M151 Protector, or M153 Protector remote weapons' stations. In this case the displays in the commander's and squad's station(s) will repeat the mounted RWS' display. Opening the commander's hatch (B) will inhibit the RWS; the squad's hatch may be opened (Alt B) however.

The dismount section for the Piranha IIIC APC is 8 men (compared with only 6 on the Piranha IIIH), carrying 2 AT-4 light anti-armor weapons, an M60E mg, and 5.56mm rifles. The TACP version carries a single two man “Forward Air Control” party (which performs in Steel Beasts Professional as a standard FO team) armed with 5.56mm rifles. 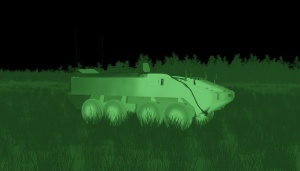 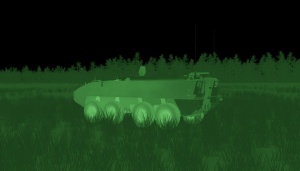 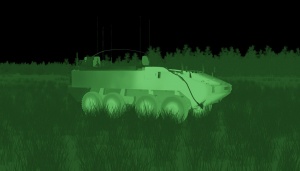 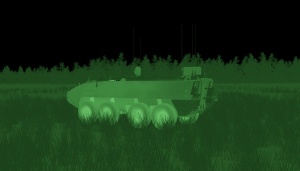