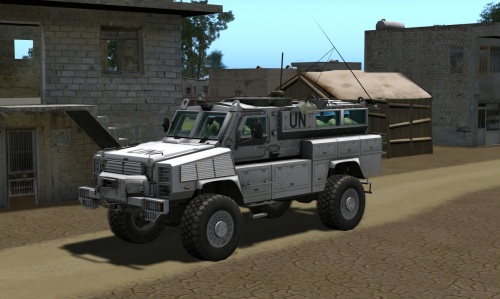 Manufactured by BAE Systems Land Systems OMC, the RG-31 “Nyala” is a 4x4 Category I (6 passengers, 15-25 tonne) Mine Resistant Ambush Protected vehicle based off of the earlier TFM Industries produced Mamba APC. Like its Cougar and Bushmaster cousins, the RG-31 is survivable against IEDs and other mines, using hull shaping and isolation of the crew from the hull to provide much higher crew survivability than conventional light vehicles. A popular design, the Nyala is in use by a dozen nations worldwide including the United States, Canada, and Spain plus the United Nations.

The modeled version is the RG-31 Mk5E, an extended model with additional passenger/cargo capacity and equipped with superior blast and ballistic protection (classing it as a Category II MRAP [8+ passengers, 15-25 tonnes]). Intended as an Infantry Mobility Vehicle for use in urban areas, counter-insurgency operations, and low intensity conflicts the RG-31's armor is thin, and the vehicle has proved somewhat less survivable than the Cougar, but overall protection exceeds NATO STANAG 4569 Level 2. Still, the RG-31 should avoid exposure and utilize direct fire only in support of its dismounted infantry, or in emergencies against other light vehicles.

This vehicle is fully modeled and crew-able at the Commander's (F7), Gunner's (F6 when a RWS is mounted), Driver's (F9), and Squad Leader's (F11) positions. By default the RG-31 is unarmed, but may be equipped with the Samson remote weapon station.

Beginning with revision 4.156 the RG-31 may be equipped with the Diehl Active Vehicle Protection System (AVePS) to enhance protection against RPG and ATGM threats. 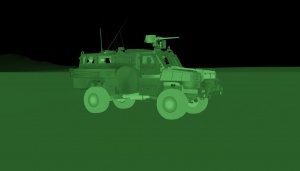 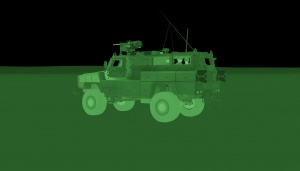