The Red Leopard I campaign began on 22 January 2010 and concluded on 2 April 2010. The campaign was designed by Tarball and Volcano. 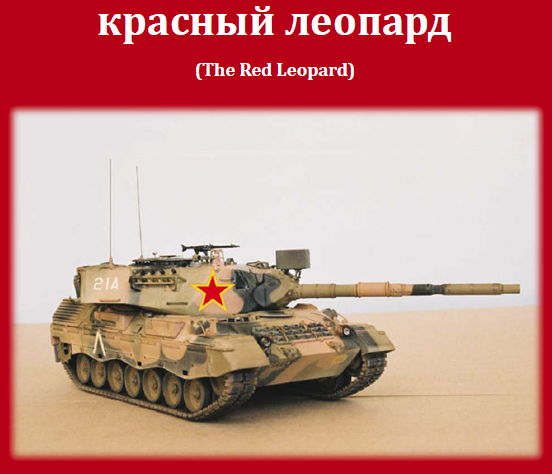 What follows is some background and context information meant to document how the campaign came about and demonstrate the thought processes involved.

The Red Leopard online campaign began, as many have, as an idea tossed around within the community concerning the ability (or lack thereof) to play in Warsaw Pact OPFOR equipment in a central Europe setting. As those discussions kicked around, the genesis for the Red Leopard began with discussion arising from Tacbat's 1st Operation Variable (2009) online campaign. As that campaign concluded in a stalemate across a river with RED and BLUE operating nearly-matched western equipment, thoughts returned to the desire for a campaign where superior western equipment faced "hordes" of Warsaw Pact Equipment in what would have been a more believable deployment of modern western equipment in the 1980s and beyond. Community members Volcano, Tarball, Dark Angel, Mogwa, Tacbat, Sean, and Rogue Snake were those who principally contributed to the discussions that brought about Red Leopard I. In late 2009, Volcano and Tarball set about putting the details together for what would become Red Leopard I. While Tarball mainly selected the terrain, planned the units, and the campaign objectives, both Volcano and Tarball worked on the Order of Battle, the general premise, and outline of the campaign.

Imagine Harder: Using the Leopard AS1

While the premise of the campaign - stop the Red Hordes as they race across the plains of North-Central Europe (Germany) - was fairly evident, a timeless problem and quirk of SteelBeasts (Pro PE and otherwise) quickly arose: what about playable OPFOR armor? While Tarball had earlier coined the term "Head to Red" as a concept whereupon a few humans controlled non-playable OPFOR equipment against other human BLUEFOR players, we needed REDFOR players to be able to operate the main gun of at least the MBT for RED. While the idea of using the Leopard I as a stand in for a T-72 (or earlier) wasn't entirely new, the utilization of this substitute quickly gelled as a central theme for the Red Leopard campaign.

"If you just squint your eyes and IMAGINE, you could believe that the Leopard I was a stand in for the T-72 MBT"

was an initial premise when the campaign design principals first put the call out for participation. Of course there was natural, and valid, skepticism regarding our substitute, but the campaign designers wanted the idea to take wing, so the typical response during the lead-in to the campaign was:

At the time, and in response to a fairly constant demand for a playable T-72 in SB Pro PE, eSimGames had suggested that we use the Leo I as it would be an acceptable substitute in the meantime. Thus, the skepticism regarding the use of the Leo I was presaged by general displeasure on the unavailability of a "proper" OPFOR MBT. In this case, we were out to test the Leo-AS1-as-T72M1 premise as a key concern of the campaign. Thus, with some consultation between the design principals for the campaign, Volcano and Tarball, the following assumptions and factors promulgated the design of the campaign:

Structure of the Campaign - Rules

The rules for the campaign can be reviewed in this document: Red Leopard I Campaign Rules

Given the limitations of SB Pro PE, with respect to the ability to import new height map areas, the design team had to select from four areas in Germany for the campaign. In the end, the Hannover height map and terrain map were selected. Fortunately, community member Manteuffel had uploaded some significant improvements to the terrain map and these were used for the Red Leopard I campaign - thank you again Manteuffel.

just double-click on the file and Google Earth should open up and translate to the campaign area.

The image below shows the area. From right to left, you can see the area for the planned first five missions as red rectangles. The red rectangles are 20km wide and 12km high and represent the four corners of each battle map. The last mission was fought just east of Minden, but does not appear on the map.

The terrain was a reasonable choice as it contained a variety of environments. However, as the area is hilly, battlefield maneuver was greatly influenced by the presence of this terrain. In fact, the hills completely dominated tactics to the chagrin of players on both sides.

While there were six missions played in the campaign, details on the last mission are not available at this time. However, details and observations of the first five missions are presented here. 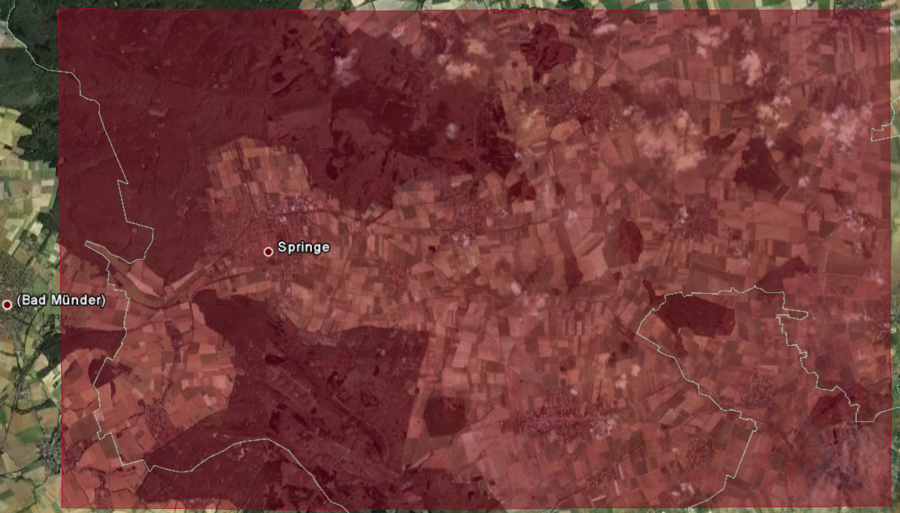 As would be predicted, RED took heavy blows on this mission as they tried to reach the western map edge by way of hills.

Outcome: BLUE tactical victory, but RED does meet its map objective goals sufficiently (penetrates up to or slightly beyond the "50 yard line" on the battle map) 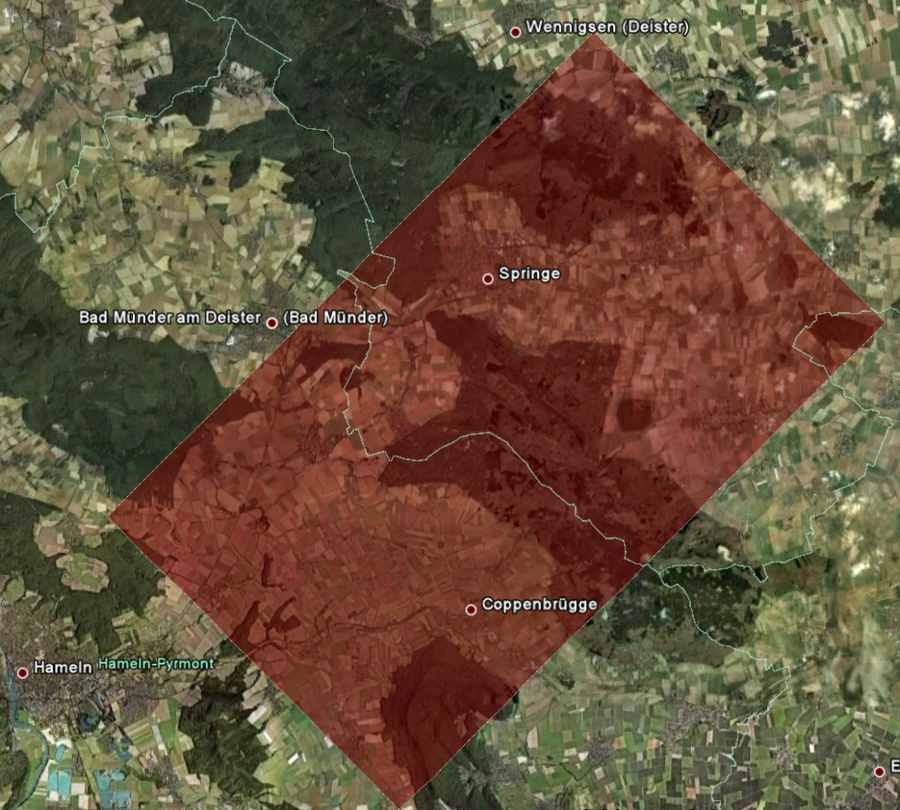 Again, RED took heavy losses whilst trying to exit the hills from the previous mission. It is hard to characterize this battle as anything other than a BLUE win. There was an interesting "Kill Sack" situation in the south where RED armor and PCs continually entered into an ambush area, creating heavy losses. 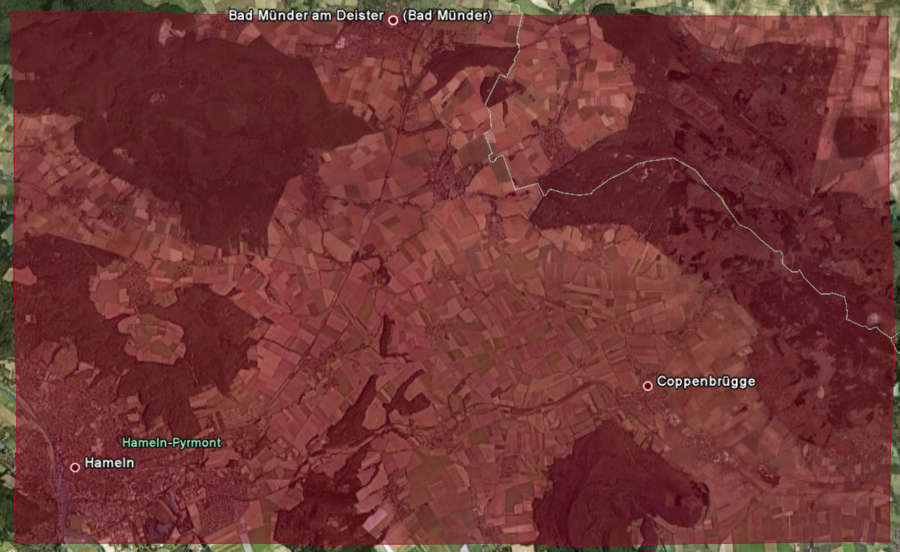 RED made a good breakout on this mission and took fewer losses. RED's map objectives were completely and decisively met. This mission was the first real success for RED and likely kept RED in the fight until the end. It was also during this mission that the "hill fighting" shifted from a liability to an asset for RED. RED's breakthrough came in the extreme northwest corner of the map and influenced RED's advanced for all subsequent missions. 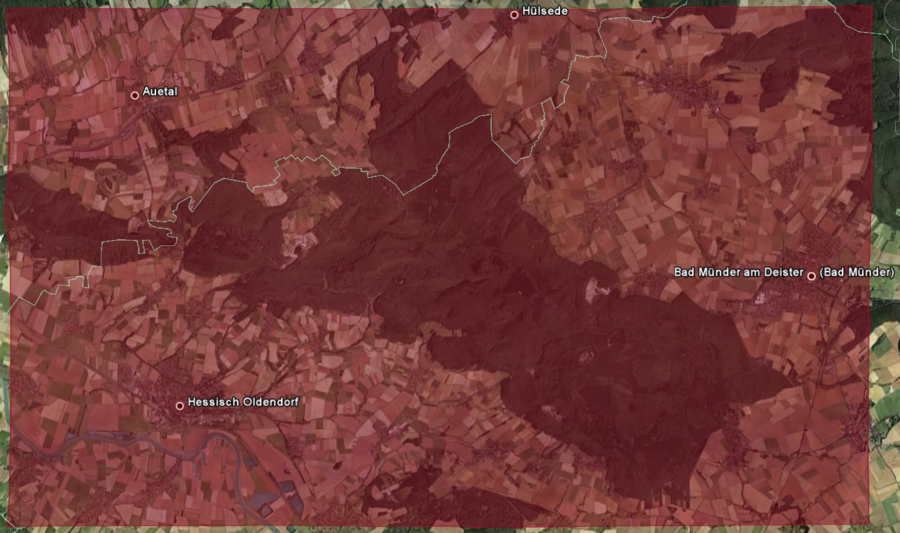 Mixed results with lots of close-in "knife fighting" in the hills. Many devastating engagements for RED where heavy losses were taken. Map progress for RED was good as BLUE gave ground in order to preserve fighting forces. This type of fighting would dominate until the last mission of the campaign.

Outcome: Draw with BLUE having a slight tactical advantage. Both BLUE and RED had devastating MBT losses. 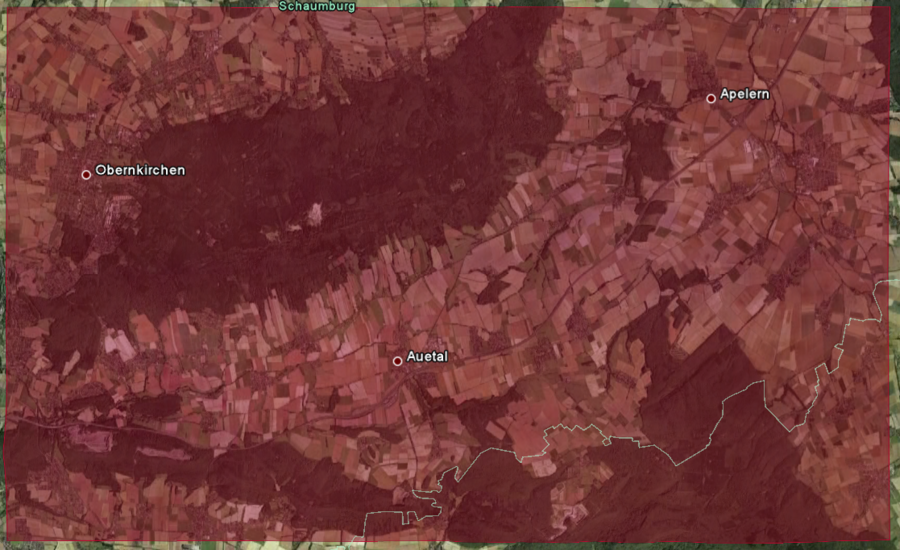 Better synopsis needed. This battle likely ended early in a BLUE attempt to preserve forces. Another extensive hill and forest fight with lots of close-in "knife fighting." Decidedly not suitable for tanks. Both RED and BLUE both suffered heavily from attrition by this stage.

This mission was waived by BLUE in preference for settling the campaign, in Mission 07, at RED's intended LOA in the Minden area. RED reaching their LOA constituted a Campaign Victory Condition. 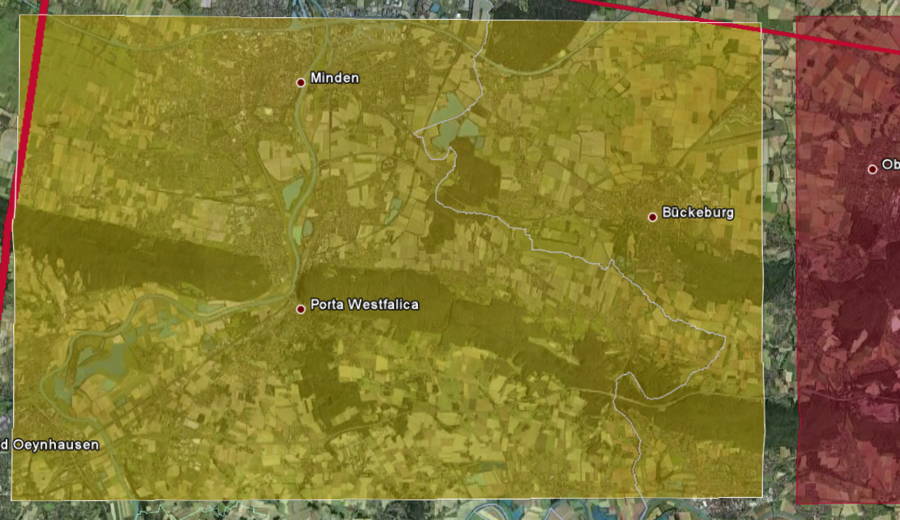 Red pushed forward sparing no expense (see losses) towards Minden (along the north of the wooded area that runs along the map) and towards Porta Westfalica (along the south of the same wooded area). The push towards Minden, consisting of at least one battalion, was stopped at the river south of Minden. The wooded area in between Minden and Bueckeburg was the scene of some fierce fighting, and was the place where Red in that sector suffered the most attrition.

The advance to Porta Westfalica saw heavy fighting in the urban area of said town. Blue vehicles and infantry were holding the area well, but over two Red battalions made the push through to the river and in the end all opposition was eliminated there. With time running out on the last scenario, Red crossed the river at a bridge at Porta Westfalica. On the other side, a blocking force headed north to secure the flank, while the remainder of the crossing units moved west along the north side of the river, just south of the wooded area that runs along the center of the map. Blue sent all units it could spare to the hill that runs along the wooded area and succeeded in knocking out some red vehicles as the latter tried to get off the map edge. Red Hind helicopters were finally committed to the fight, knocking out several Blue tanks on that ridge.

Outcome: In the end several Red tanks got off the map edge but the scenario did not end immediately and the tanks were sitting ducks there and eventually destroyed, thus preventing the end if... event from occurring (since it, presumably, counted living units in the breakthrough zone). This caused some confusion as to what the final result of the campaign was, but it was decided that Red broke through with enough tanks and thus won the campaign, but Blue dealt serious losses on Red in the process. Since the scenario did not end by an event, and because of the heavy fighting to the last minute from the first mission to seventh, and because of the heavy losses incurred getting to the breakthrough in Mission 7, it was felt, by the Red CO, that the result was more of a draw than a Red victory.

Scenario File: Red Leopard Campaign - Mission 07 (most likely NOT the final scenario used that night - see Sean, Volcano, or Tacbat for the file)

Narrow Red Victory, or perhaps even a draw according to RED CO.

The amount of heavy attrition proves that conventional armed struggle would have likely devolved quickly into theater-level nuclear weapons possibly being used. In Red Leopard I, despite RED's attempt to flow around BLUE "like water," RED sustained staggering losses, despite gaining ground. Since Red Leopard would have likely transpired over a 24-72 hour timeframe in reality, it is hard to imaging that such a push would be truly sustainable. In fact, it may not have been the case that RED would have pressed in this sector at all given these losses. At the Brigade level, and higher, RED may have just steered around this engagement.

Some detail from the Blue POV is needed.

Obviously, the best substitute to represent the T-72 would be an actual T-72, preferably the T-72B in the above match up.

The following awards were made so that individuals can display them in their forum signatures if they so desire. They are simply for fun, for a bit of nostalgia in remembering the campaign. The only requirement is that you abide by the forum rules on signature sizes (400 x 60 maximum), and that you are honest to those when choosing to display them.

All those who participated in the Red Leopard I campaign may, in good faith, display the following ribbon in their signature if they so desire.