Red Tide is a campaign created by Volcano, Mog, and Dark. 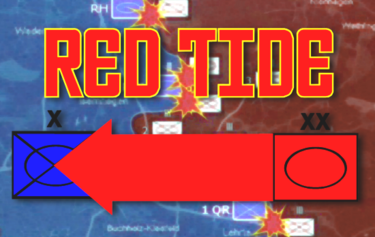 The Red Tide campaign is based on the ideas behind Red Leopard and also contains elements/rule mechanics of Operation Fury. The goal of the campaign is a low complexity, easily approachable campaign that everyone can understand and a campaign that stresses combat in high intensity scenarios. The setting is classic Cold War period where the vehicle selections are based on a specific year during the Cold War, depending on the iteration being played.

See also Red Dragon, a variant of this campaign.

What is the overall mission for both sides?

At the operational level, OPFOR's (Red's) overall objective is to push through to the end of the full map used for the campaign. Once OPFOR gets nine tanks + PCs (BRDMs, bridge layers, self propelled artillery, air defense artillery, FO vehicles, and recovery vehicles do NOT count), about a company sized element, across a defined line (all nine must be alive), the campaign is over in an OPFOR victory. BLUEFOR's (Blue's) overall objective is not to completely annihilate OPFOR, rather, they have to conduct a strategic delaying action long enough for certain conditions to be met for the campaign to end due to OPFOR running out of time. This running out of time is simulated by a "Peace Talks scale". See section pertaining to ending victory conditions for more information.

What forces are available to each side?

Both sides use a static Table of Equipment and Organization (TOE) which is defined and kept track of on the wiki page belonging to the specific iteration page.


For the most part, the equipment in the TOE table is what you have for the duration of the campaign, although there are ways to get "attachments" which are basically temporary reinforcements, and "replacements" which is a form of strength recovery over time. Both of these are explained in detail in the reinforcement section.


Each week, the overall CO of both sides will choose the unit in their TOE to fight with from the choices available to them. BLUEFOR's CO chooses any three companies (to make up that battle's task force), while OPFOR's CO chooses one of their available regiments.

How does the campaign play out from week to week?

Unique to this campaign, the actual fighting that occurs each week is supposed to represent one full day of fighting. As such, the weekly battle is broken into two parts: a "Reconnaissance Battle" (aka. Recon Battle), which occurs in the middle of the week (attendance is optional), and the actual "Main Battle" which occurs at the primary scheduled time. The Recon Battle is basically a side show operation, which supplements the Main Battle, while the Main Battle is what actually determines the outcome of the campaign. If you do poorly or no one shows up for the Recon Battle, then the Main Battle will be more difficult and the overall progress in the campaign may suffer.

The Main Battle is very straightforward, OPFOR's goal in each is to capture as much terrain as possible by pushing forward towards the eventual breakthrough line at the end of the campaign map, and BLUEFOR's goal is to resist/delay and inflict as many casualties as possible. Time limit of Main Battle scenario is 100 minutes.

How is the direction of attack determined in the Main Battle scenario?

For the most part, the direction of attack across the strategic campaign map is influenced by the OPFOR commander. The battle map from week to week will be positioned so that it is roughly centered in the direction of OPFORs advance from the week before, but the OPFOR commander way provide specific instruction on shifting the attack up to 8km to either side of its current location; this is denoted on the map by the yellow bracket.

How is front line trace and objective ownership determined?

A nearly identical technique of front line trace from Operation Fury is used in this campaign, except that the neutral zone between both sides is larger here (2km as opposed to 1km) and the ZOC radius of all CO vehicles in general are slightly larger (3km/1.5km as opposed to 2km/1km); based on typical BLUEFOR/OPFOR unit frontages and CO distances from own troops. Also, because Operation Fury is a much more deliberate campaign with irregular forces and some COIN aspects which determines objective ownership by front line trace only, objective ownership in Red Tide is different in that it is only based on traditional occupation criteria.

Both sides have four CO vehicles in every Main Battle scenario: one for each of the three companies (Blue) and three battalions (Red) and one for the overall commander. CO vehicles are used to determine front line trace by projecting a zone of control (ZOC) around them, their end position is referenced to determine ownership of the surrounding terrain by connecting the zones of control projected by each CO. This zone of control then determines the new position of the front line, and both sides are backed off to create a neutral zone. In areas where two sides's ZOC projects into the same area (such as the case when a CO from each side is in close proximity), both side's zone of control cancel each other out in such a way that the difference between the two is taken; this is called a "contested ZOC". In these contested areas, any presence of infantry will override the cancelling out effect, although infantry from both sides cancel each other out as well in some cases. Needless to say, this makes infantry vital to controlling contested areas along the front line.

When a non-overall commander CO vehicle is destroyed, the next vehicle in the chain of command for that company becomes the second-in-command and receives a 1/2 size ZOC. If a second-in-command circle is consumed completely by an enemy full sized ZOC, then it plays no effect on front line trace IF no friendly infantry are present in the contested area (because the infantry would override the overlap).

What other objectives are in the Main Battle scenario?

Objective ownership of limited objectives is directly determined by occupation during the mission and is not related to front line trace. This is a basic premise that must be understood: occupation of an objective does not directly translate to captured ground, and vice versa, and this is because the front line trace determination is understood to happen between battles when both sides re-consolidate.

The criteria for ownership of limit objectives is as follows:

CAPTURE OBJECTIVES
(initially these are objectives that begin in enemy territory)


To capture an area, by the end of the mission the following must be true...


a) Friendly forces in a contested region outnumber enemy forces

HOLD OBJECTIVES
(initially these are objectives that begin in your territory)


To hold an area, by the end of the mission the following must be true...


a) Friendly forces in a contested region outnumber enemy forces

c) Friendly AFVs in a contested region are > 0

d) No enemy forces ever entered the region

How are deployment zones determined?

For the most part, both side's deployment zones are open to their entire area, providing complete freedom for both commanders to place units where they want in friendly territory. BLUEFOR can deploy its forces anywhere west of its FLOT line (Forward Line of Own Troops), while OPFOR always has a 1.5-2km buffer zone behind their FLOT line, which is their security/reconnaissance zone, and the rest of the area behind it is OPFOR's main body deployment area. The reason for this difference is due to the fact that BLUEFOR is on the defensive and needs to position the defenses accordingly anywhere in their own area terrain, as they will prudently decide to back off of the FLOT based on the terrain, whereas OPFOR is backed off a bit to limit the "immediate mad rush" effect.

Whether or not OPFOR's third battalion arrives as reinforcement or is deployed online with the other two battalions depends on two factors:

The basic premise behind the Recon Battle is that it is a small engagement where the objectives for both sides will be randomly determined from week to week. These objectives are limited in scope and obtainable, and primarily relate to typical missions that a reconnaissance unit would conduct. The units used in the Recon Battle are always replenished from week to week and their composition on BLUEFOR is mostly a couple of platoons of mixed units, and on OPFOR it always consists of the forward recon elements based on Soviet doctrine, but their actual vehicle types and number may vary. Time limit of Recon Battle scenario varies, but is typically 60 to 90 minutes.

What happens after the Recon Battle?

RECON BATTLE RESULTS (carried over to the "Main Battle")

How do you get reinforcements?

Technically, the only forces you have are the ones you start the campaign with. However, during the course of the campaign you may receive attachments and/or replacements for depleted units.

There are several sub rules pertaining to how replacements are applied. These do not have to be memorized, but the method is mentioned here for clarity:

Attachments are temporary forces that get assigned to your side when limited objectives are achieved during the Main Battle scenario. These units do not belong to your TOE, rather they are temporarily attached from other organizations. Most but not all attached units gained throughout the campaign will get carried over to following Main Battle scenarios, providing that they survive of course, however at any point all attached units may be withdrawn. For more information about attachments, see the specific iteration page.

When does the campaign end?

There are three ways for the campaign to end:


+1 After each Main Battle. Time marches on, and OPFOR's logistical support constantly declines; this means that providing there are no negative and no other positive movements of the meter, the campaign has a maximum of 9 Main Battle scenarios.

+1 When an OPFOR regiment's non-support vehicle strength drops below 30% strength for the FIRST TIME. This can happen once for each regiment, so it may only occur up to four times in one campaign.

-1 When a BLUEFOR task force's non-support vehicle strength drops below 40% strength for the FIRST TIME. This can happen once for each task force, so it may only occur up to three times in one campaign.

What in game actions are considered punishable behavior?

The utmost intent of this campaign is good sportsmanship. There may be times where umpiring calls will be made to punish one side to keep that side from playing with bad sportsmanship and when that happens it will be clearly announced to the offending side. Some of the most important issues are, but are not limited to:

In short, if something feels wrong then it is probably something that you should not do.