Type of Munition and Purpose

The 155mm M898 Sense and Destroy Armor Munition (SADARM) is a "smart" artillery submunition originally designed for precision engagement of light vehicles such as self-propelled howitzers by means of top attack utilizing millimeter wave, infrared and signal processing technologies. It was originally designed for counter-battery missions, but is effective against a wide range of targets, especially when used in volume.

Each round contains two payload sub-munition packages, which are ejected from the projectile base by expulsion charges, allowing the potential to destroy or disable up to 2 vehicles per round fired. Once the munition separates from the projectile body, a parachute deploys, while onboard sensors search the ground underneath for targets. Once a target is acquired, the sensor will determine the center of the target and the explosively-formed penetrator (EFP) will penetrate the vehicles top, which is expected to have very little armor. Maximum lethal range for the EFP phase is approximately 150 meters, and it has been designed to successfully engage even in environments with heavy use of countermeasures. If no target is detected the submunition is designed to self-destruct. 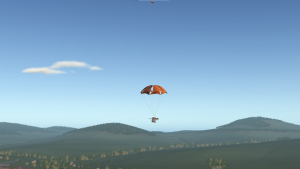 A M989 munition in the parachute stage with EFP and sensor looking for targets.

At the time of development and testing, it was the U.S. Army's first fire-and-forget, top-down attack, multi-sensor artillery munition. The system was used for the first time during combat during the 2003 Invasion of Iraq, with a total of 121 rounds reported fired by the 3rd Infantry Division with 48 vehicle kills.