Difference between revisions of "T-14 Armata" 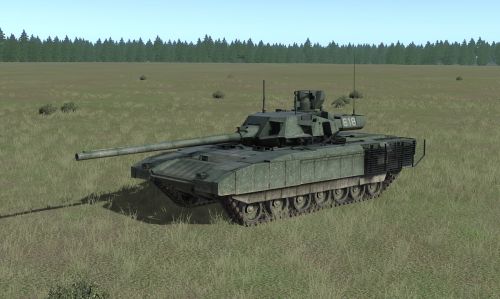 The T14 Armata as it appears in Steel Beasts Professional

The T-14 Armata (Rus: cannon/tank) is a fourth-generation main battle tank based off of the Armata Universal Platform developed by UralVagonZavod tank manufacturing company. A “clean sheet” design, with no relation to the Soviet era T-64/T-72 family and their derivatives, the T-14 features a modular hull containing an armored crew capsule situated forward of the turret housing the entire three-man crew. The T-14's turret is unmanned and controlled remotely from the crew capsule. In this respect it shares many design cues from the 152mm armed Objeckt 195 and the U.S. M1 Tank Test Bed.

Main armament consists of a fully stabilized 125mm 2A82-1M smooth-bore tank gun backed by a coaxial 7.62mm PKMT machine-gun and a remotely controlled roof-mounted 12.7mm Kord heavy machine-gun. The 2A82-1M gun claims a higher muzzle velocity compared to the Rheinmetall L44 and much greater accuracy compared to the 2A46M found on the T-90. The main gun is fed by a 32-round auto-loader allowing a 10-12 round per minute rate of fire and lacks a bore evacuator due to the unmanned turret. An additional 8 rounds are stored in the turret bustle. Although assumed to be able to fire gun-launched anti-tank guided missiles - as with other Russian tank designs - this capability is not modeled in Steel Beasts Professional.

Designation of the fire control system is unknown but involves an integrated gunner's primary sight and IR backup sight equivalent to those of the T-90MS along with a third-generation thermal sight and laser rangefinder; a full meteorological suite is included to increase first round hit probability. The commander is provided a dual channel day/thermal panoramic sight with a separate LRF for hunter-killer capability which also serves as the sighting system for the remote 12.7mm Kord anti-aircraft machine gun.

Motive power is provided by a governed 1500hp twelve-cylinder ChTZ 12N360 diesel engine coupled with a twelve-speed automatic transmission as a single powerpack, something new for Russian designed vehicles. Suspension involves some form of active type, adjustable at the first two and final roadwheel stations. 360° camera views are provided for the commander and driver to maintain situational awareness.

Overall protection is a composite matrix topped with Malakhit add-on explosive reactive armor offering a claimed 900mm+ of RHAe frontal protection. Given the vehicle's general layout, flank protection is probably equivalent to its western counterparts while anti-RPG bar armor is fitted to the rear for added protection. Although it is assumed the turret armor array will be reworked for the final production models, protection for the modeled version is light; sufficient against medium auto-cannon, HMG, small arms, and artillery splinter. Integral to the T-14's defensive suite is the Afghanit active protection system (APS), which consists of both “hard kill” and “soft kill” countermeasures. The APS is guided by four radar panes (likely AESA) at the turret corners for 360° coverage. The main hard kill launchers are mounted in two groups of five between the turret's front sides and the chassis covering 160° of the frontal arc and are supplemented by the NII Stali “Upper Hemisphere Protection Complex” which consists of a vertical launch system at the turret's left rear and two steerable box launchers with 12 smaller charges each (neither of which is currently modeled). The projectiles launched by the hard kill systems are of an unknown type, but modeled as high-explosive fragmentation charges which are extremely effective against ATGMs, HEAT warheads , and, to a lesser extent, KE penetrators. Soft kill systems include laser warning receivers coupled with passive smoke and active jamming in both the IR and microwave ranges (jamming systems are also currently not modeled).

Beginning development in 2010, the T-14 was unveiled during the 2015 Moscow Victory Day Parade. Although intended to become Russia's future main battle tank with an expected order of 2,300 for delivery by 2020, both Russia's economic situation and the T-14's experimental nature resulted in a reduction of the order first to 100 vehicles and finally down to 32 (a single tank battalion) as part of a operational evaluation Brigade. 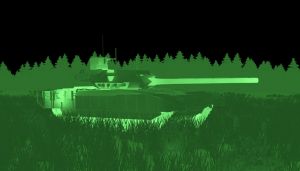 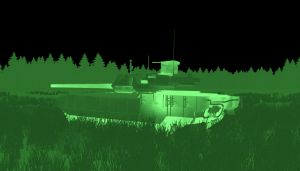