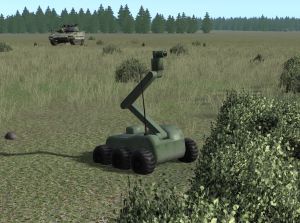 Beginning with version 2.304, dismounted infantry platoons (mechanized, leg, and air assault) may be equipped with a unmanned ground vehicle (UGV) which can be remotely controlled and provides thermal and optical camera views from locations up to 300m away. Based on a small rugged 6x6 chassis, the UGV is fitted with both front and rear standard definition cameras, with the front camera mounted on a 1m extendable mast, capable of 360° rotation, and equipped with variable digital magnification up to 40x. Unlike its micro-UAV cousin, although relatively small and very quiet in operation, the UGV may be spotted and engaged by enemy units.

If the vehicle is steered beyond the range of the remote control (300m), the UGV will automatically turn around and try to return to the squad. To pick it up, you must be close (20m or so). 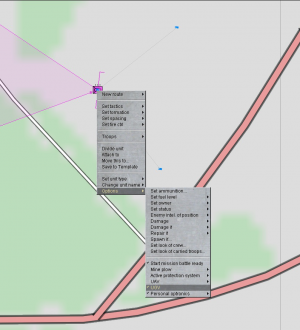 Equipping a PC platoon with the UGV

If your squad has one (the UGV has to have been "given" to the infantry in the mission editor), hit Y while dismounted. Switch to F2 for "remote control view" that will follow your UGV, so your WASDX commands don't steer the squad but the UGV. F3 gives you the basic front camera view from the UGV. Use Alt+F1 to access the senor mast camera, Q and Z to elevate and retract the mast, and N or Shift+N to zoom in or out, respectively. Alt+F2 accesses the rear camera, and Alt F3 returns you to the front camera. Num+ toggles between day and thermal channels for all cameras, and Shift+Y recovers the UGV.

In reality only CV90 squads use these, but in Steel Beasts PRO PE any PC, IFV, or infantry platoon can be equipped with UGVs. To do so in the mission editor select and right-click a PC or infantry platoon, then select "Options>UGV".