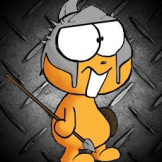 By Gladiator(911),
October 17 in Scenario and Maps